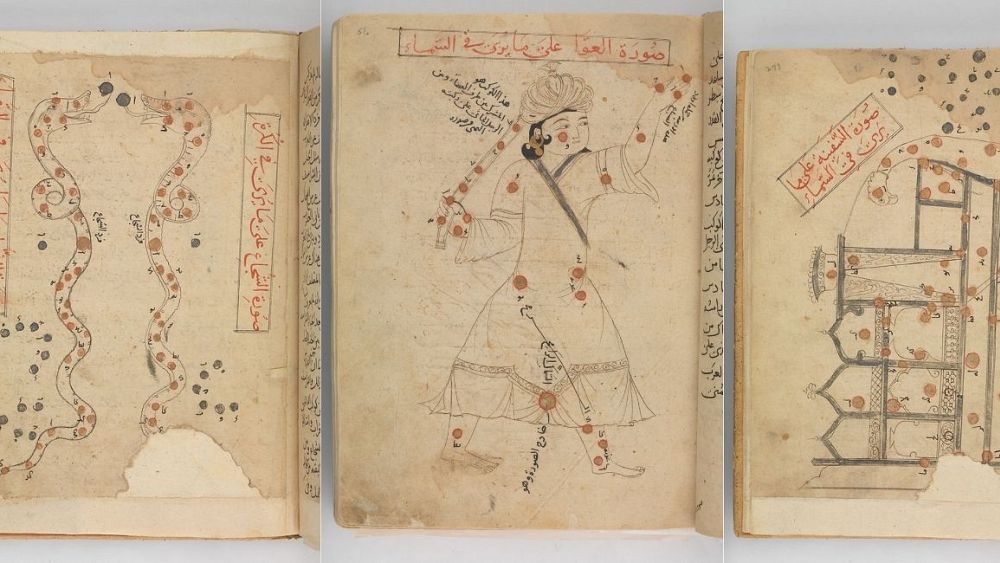 The first facsimile faithful to the original of the manuscript of the Images of the Fixed Stars was also presented at the initiative. The book is the work of one of the most famous Muslim astronomers of all time, Abd al-Rahman al-Sufi, and it was commissioned by the special order of Mirzo Ulugbek, better known as Ulugh Beg, a Timurid (Sunni Muslim) sultan. Ulugh Beg was also a respected astronomer and mathematician.

The ancient manuscript, which has now become a book, has historical significance for several reasons: it is living proof of the centuries-old fascination with the firmament, the golden age of Islamic science, and the antiquity of the Arab tradition in astronomy, to name a few.

The book is hailed as a masterpiece of Central Asian art: it contains 74 fascinating miniatures of constellations executed with the best technique. It also marks the trend where illustrated manuscripts were increasingly produced and is one of the oldest treatises of this genre. The manuscript contains miniature illustrations depicting the Sultan in the form of the constellation Cepheus.

Beyond its artistic value, the book also has enormous scientific importance. The work, containing 48 constellations known as Fixed Stars, is based on the knowledge of the stars transmitted by the Greeks but for the first time includes the principles of ancient Arab astronomy.

Before Abd al-Rahman al-Sufi, the first known attempts to describe the starry sky were made by the Greeks. By Ptolemy (100-160), to be precise, who was an ancient philosopher, mathematician and astronomer from Alexandria. His writings were considered standard scientific work in celestial science until the beginning of the modern era. His most important work was “Almagest”, a systematic guide to mathematical astronomy, which was the main reference for centuries until Abd al-Rahman al-Sufi entered the scene.

Al-Sufi’s work on fixed stars was based on Ptolemy’s Almagest, but he corrects various claims and supplements them with his own empirical conclusions. He took all of the star names mentioned in Ptolemy’s star catalog and merged them with those mentioned in Arabic literature.

In his observations, Al-Sufi added the earliest known descriptions and illustrations of the Andromeda galaxy as well as the first recorded mention of the Large Magellanic Cloud – the first galaxies other than the Milky Way to be observed from planet Earth.

In the astronomer’s book, all the mythological figures representing the constellations are represented seen from the sky but also seen from space. And thanks to this, his work has served for many centuries as the most important guide to the stars in both the Islamic and Christian world.

Astronomy as part of the cultural heritage of Uzbekistan

The original manuscript of the Book of Images of the Fixed Stars did not survive, however, thanks to Islamic manuscript tradition, Al-Sufi’s work has survived in the copies that were made afterwards.

The contemporary facsimile version presented at the Cultural Heritage of Uzbekistan in World Collections is the result of Uzbekistan’s goal of using advanced scientific technologies in the preservation of historical exhibits and manuscripts.

Dozens of other books devoted to Uzbek works have already been published as part of the initiative. And there is also ongoing work on the digitization and publication of facsimile copies of outstanding works held in libraries around the world.

UNESCO representatives commended Uzbekistan for its initiative to preserve the country’s rich historical and cultural heritage. Renato RamÃ­rez, Deputy Director General for Culture of UNESCO, said that Uzbekistan was, in this regard, â€œan example for many countries. Research is a means of transferring not only academic knowledge, but also knowledge for our children and new generations.

La Leela is once again the best brand in the world!

Plumeria Steakhouse opens in the heart of Garapan | Way of life