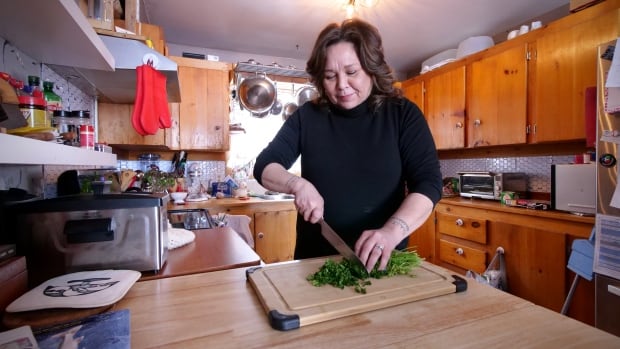 Is there room in Nunavut’s sharing economy to sell country foods? This chief from Iqaluit thinks so

What would it be like if you could buy maktaaq, musk ox and seal meat at the grocery store?

Sheila Flaherty already knows this – she saw it for herself in Nuuk, Greenland in 2019.

The Iqaluit chief and former city councilor recalls browsing through traditional Inuit dishes at the Nuuk Hunters’ Market, where the catch of the day was laid out on stainless steel tables. It is available in grocery stores and is served in restaurants.

It’s a memory that stuck with her over the years and something she would like to see become a permanent reality in her community.

“Restaurants here in Iqaluit, at least there might be arctic char, there might be caribou. But certainly in Nuuk, what I’ve found is a best hug of all the range of Inuit foods,” she said.

The response, when she posted the idea on Facebook, was mixed – traditionally many indigenous hunters share their harvest instead of selling it. Flaherty – who owns sijjakkut, a business specializing in Inuit dishes, with her husband – does this too, donating fish heads when she has too many to use in her cooking.

“With the cost of hunting and gathering, buying directly from a gatherer could help the hunter and gatherer with bullets, with gasoline…or buy grocery store food to help feed his family,” she said.

“Why can’t we have both, and celebrate both, and really create a new kind of economy based on traditional Inuit cultural practices?”

In Greenland, the wide availability of traditional foods for sale has helped to decolonize the cuisine in a way, says Minik Stenskov, a waiter at the Sarfalik restaurant in Nuuk.

Stenskov, from Narsaq in Greenland, said serving traditional food requires chefs to have an in-depth knowledge of Greenland’s animals and plants and how they change with the seasons.

Sarfalik’s menu changes every three or four months, he said, depending on the time of year.

“For example, right now musk ox is coming into season, as well as lumpfish roe. So those will be coming soon, and we’ll have more of them on our menu,” he said.

Once the snow begins to melt, the herbs and berries will also come into season and the menu will change accordingly.

Tina Karlsen is one of the restaurant’s eight chefs and the only one from Greenland. His non-Greenlandic colleagues often ask about the taste of different ingredients when putting together menus.

“They want to hear our opinions, what we think about the taste…then they try to do it, experiment, then suddenly it’s a dish – an amazing dish,” she said.

Since the restaurant serves an international clientele, Karlsen said they also create non-Greenlandic dishes. But they always try to keep some local dishes on the menu.

Flaherty knows that introducing something similar to Iqaluit would come with its own set of challenges, particularly logistical.

Keeping enough food in stock for a regular traditional menu would not be an easy task, she noted – it would require a strong network with Nunavut communities.

“If we were to have a restaurant, for example, and seal meat is on the menu every day, that’s a lot of seals that need to be captured,” she said.

She recalls working with the Nunavut Arts and Crafts Association to make seal burgers on bannock buns for Nunavut Day in 2017. When she calculated how much meat she would need, it was about 80 pounds.

“If you’ve ever seen a seal get butchered – especially the little seals – they have next to no meat,” she said.

They were successful thanks to the association’s territory-wide connections, making 500 seal sliders for the celebration, and Flaherty said she started seeing people posting on social media cooking their own from seal after that.

“It was a huge success,” she said.

Going forward, her vision for sijjakkut is to put ideas she learned from Nuuk into practice, celebrating Inuit food in a bold way.

“Our primary goal is to preserve, protect and promote Inuit cultural practices and feature Inuit harvested foods on menus,” she said.

“I am so inspired by my time in Nuuk.”