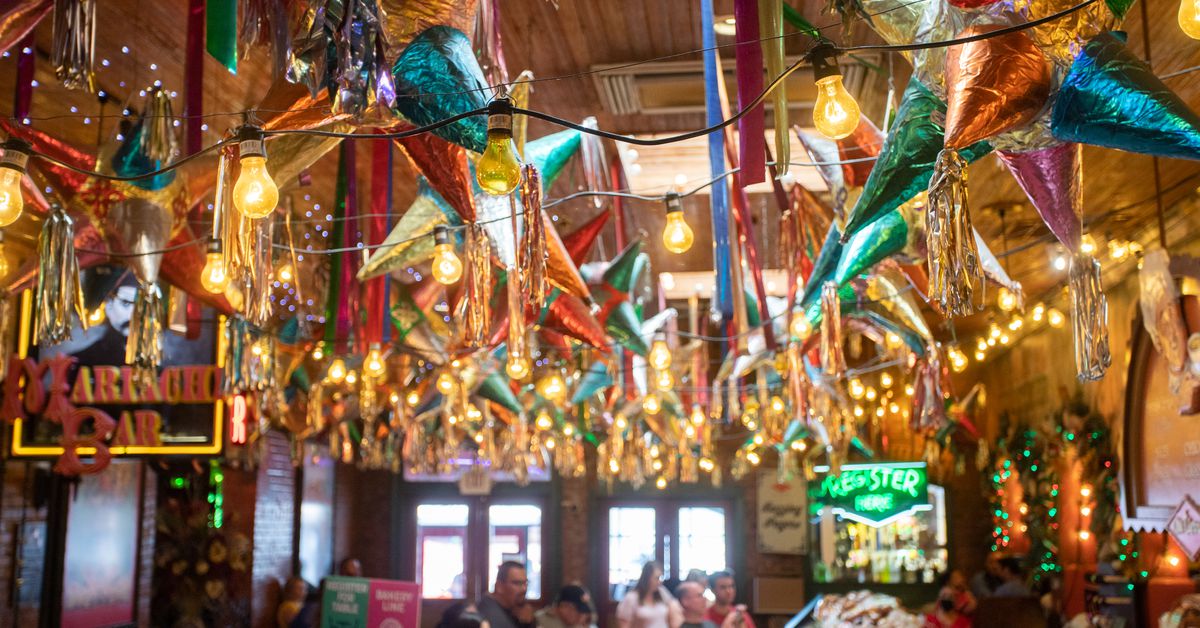 Stepping into Mi Tierra Café Y Panadería can be as overwhelming as it is captivating. From the roaming live mariachi band to the immersive, maximalist decor, it’s this intersection of cultural heritage and kitsch that has made the 81-year-old Tex-Mex restaurant a San Antonio mainstay for visitors and locals alike.

First, patrons are greeted by a large ofrenda, a memorial altar adorned with religious statuettes, candles, and photos of deceased family members, employees, and community members. The display encourages a brief bow for the deceased before fully entering a restaurant teeming with life.

The second set of doors lead to Mi Tierra’s main lobby, where customers wait to be seated or order pan dulce from the long glass display overflowing with Mexican pastries. Above, decorative piñatas, streamers and fairy lights hang from neon signs that make eyes bounce from one spot to another. All this before even setting foot in one of the dining rooms.

If you find yourself seated in the back room, you’ll have the chance to see the larger-than-life mural that spans multiple walls, dubbed “American Dream,” featuring portraits of Mexican and Mexican American historical figures, like Pancho Villa, Frida Kahlo and Selena Quintanilla. The founders of Mi Tierra, Pedro and Cruz Cortez, are depicted in the center of the mural, because this restaurant is not only their legacy, but their American dream, which began more than half a century ago in downtown San Antonio.

Mi Tierra is a reflection of San Antonio, representing the crossroads of culture, commerce and celebration. At the same time, the restaurant’s longevity is a testament to the enduring spirit of people like Pedro Cortez who immigrated and made something big out of something small. The historic Market Square, a downtown cultural hub, wouldn’t be the attraction it is today without the contributions of the Cortez family, whose restaurants are central to the square’s identity.

Pedro Cortez got his start in the food industry in the 1930s, after leaving his hometown of Guadalajara, Mexico, and then began working as a butcher at Villa del Carmen, the grocery store of his aunt and son. uncle in San Antonio, according to a press. Release. It was during this time that Cortez became familiar with his new home, making deliveries to restaurants and markets (mercados) around the city. On one of these delivery routes, Cortez met his future wife Cruz, who at the time was working at Blanca’s Cafe. The two got married, had their first child, and Pedro continued working at the grocery store until another opportunity presented itself.

“My grandfather…during the Depression met a lot of restaurateurs here,” says Pete Cortez, grandson of Pedro and Cruz Cortez. “One of the business owners here in the Market Square offered my grandfather the opportunity to purchase his business called Jamaica No. 5 in 1941.”

Jamaica No. 5 was a small, three-table cafe in El Mercado, a downtown farmer’s market on Produce Row that would later become Market Square. Since farmers were in and out 24 hours a day, the couple’s business reflected this with 24-hour service. The slogan “We Never Close” became standard business practice for the Cortez family.

The Cortez family operated Jamaica No. 5 for 10 years on a month-to-month lease, until 1951, when Pete Cortez’s grandparents had the opportunity to purchase Toyo Cafe. After the sale, they changed the name to Mi Tierra, and over the next decade the couple left Jamaica No. 5, devoting themselves entirely to their second showcase, which quickly gained popularity. Slowly they transformed it into the Mi Tierra that exists today, with its iconic year-round Christmas lights and a panadería.

By 1961, the couple had ambitiously bought out the entire commercial block of El Mercado, which did not sit well with the city of San Antonio’s separate plan to buy back the same block for demolition to pave the way for a new development. Pedro Cortez knew he had a fight ahead of him to save the place. “That’s when he had to get a little bit militant within the community, get heavily involved politically to try to salvage the investment and the 20 years he had put into Market Square,” says Pete Cortez.

Over the next few years, Pedro Cortez appealed to the city and many related organizations, including the San Antonio City Council, the San Antonio Conservation Society, and the San Antonio Chamber of Commerce, advocating for El Plaza Mercado, and ultimately the city decided to revitalize rather than demolish the neighborhood.

After a huge renovation in the 1970s, El Mercado was restructured to include a mini-mall for artisans and farmers, several covered passageways lined with Mexican decorations and, of course, Mi Tierra, to constitute the plaza, and officially renamed Market Carré. The historic district would later become home to the other Cortez family properties, including La Margarita, Viva Villa, and Mariachi Bar (which is attached to Mi Tierra).

In 1984, at the age of 66, Pedro Cortez passed away, leaving his wife Cruz and their children to continue operations at Mi Tierra, subsequent generations of the Cortez family have stepped up to honor the founder’s legacy. Cruz retired at age 90 and died in 2019 at age 98. Mi Tierra continued to operate 24/7 until March 2020 – the start of the coronavirus pandemic – 79 years after Pedro and Cruz first expanded into 24-hour service.

In the few weeks leading up to the COVID-19 closings, Mi Tierra experienced a downturn in business, particularly during its late-night hours, and things started to get uncertain, not just for the restaurant, but for the entire marketplace. Eventually, like all businesses deemed non-essential, it was mandated to close its doors entirely; this was a problem in itself as the restaurant had no kind of key as it literally never closed. According to Megann Pettit, the restaurant’s communications manager, when the closure happened, they had to purchase chains and a deadbolt to properly lock the business. As the restrictions remained tight for months, they had to find other ways to run the restaurant.

“It’s kind of like a movie, like almost a Broadway play that goes on all day, and everyone on our team is part of the play”

“We switched to a grocery store when the pandemic first hit, and we were doing a lot of grocery-type things, selling paper goods and bulk food, and we were also doing take-out food,” says Manuel, director of operations. Moreno. The restaurant also opted to use third-party delivery app services like Grubhub and DoorDash for the first time, as many restaurants have done to compensate for closed dining rooms.

When restaurants were allowed to reopen and dine-in service resumed, Mi Tierra returned but without his 24-hour schedule. Although Texas has lifted its mandates for all COVID protocols, the restaurant, which seats approximately 600 guests, continues to take certain precautions to keep its employees and customers safe, including the use of air purifiers. and health surveys for staff members, while continuing to limit its hours of operation to this day.

Although the pandemic has caused significant changes, parts of Mi Tierra have been able to retain a semblance of the past. The food, despite supply chain issues, has stayed true to Tex-Mex tradition, with plenty of daily servings of enchiladas, Spanish rice and refried beans. Mariachis, known for happily strolling through dining rooms, can finally serenade patrons again, although they now do so with masks. And the hosts and servers still wear their colorful Mexican-style outfits with flowers in their hair.

“It’s kind of like a movie, almost an all-day Broadway play, and everyone on our team is part of the play,” says Pete Cortez. “Overall, it’s just part of the whole mystique and aesthetic of the restaurant.”

While a handful of longtime employees, some of whom had been there for decades, decided to retire at Mi Tierra during the pandemic, others decided to wait, including chef Raul Salazar, who has been in the business for over 50 years and continues to lead the kitchen to this day. Company-wide, La Familia Cortez employs more than 500 people in four restaurants.

Being able to adapt to the changing world has been essential to Mi Tierra’s survival, from limiting its hours to increasing protocols for the safety of its staff and customers. While the pandemic has created hurdles, Mi Tierra – “my country” in Spanish – remains a downtown San Antonio staple that continues to grow in the face of adversity, and what better symbol of that than its mural.” American Dream”, which serves as a reminder of the persevering dream that began with Pedro and Cruz and has evolved into four generations of restaurateurs.

Kikkoman to launch 100% vegetarian oyster flavored sauce made for India