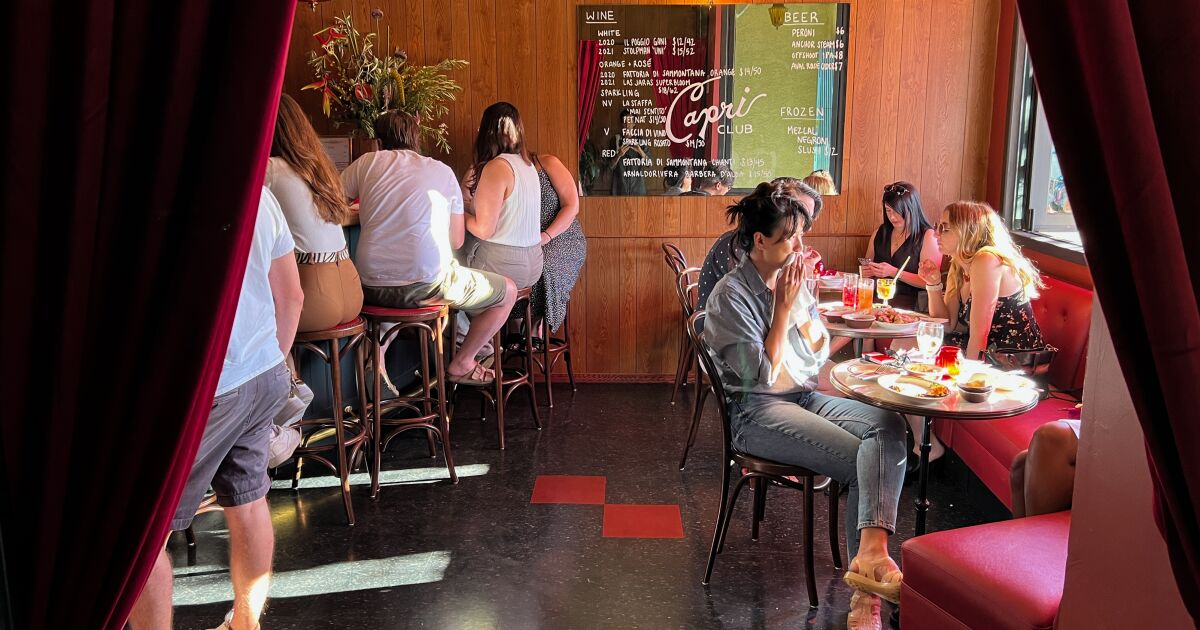 The hippest bar in Los Angeles? It’s at Eagle Rock, and it’s a retro Italian treat

Around a quarter to seven on a recent Wednesday night at the Capri Club, the sun had almost set behind the buildings opposite, and the shifting light created microclimates in the atmosphere around the bar.

Up front, along the sidewalk tables and just inside the open bay window, the crowd still looked like it was daytime drinking: most people were sipping red punch spritzes or Negroni-colored slushes. orangesicles. In the center of the room, shadows had begun to stretch along the semi-circular bar and the two dozen people gathered around it; only half of them were lucky or aggressive enough to grab one of the 12 stools. Here, the working day seemed definitely over. It was happy hour time.

Dusk had already reached the farthest corner of the bar – the one with the most coveted of the four leather booths, where wood paneling meets a mural depicting a mountainous curve of the Italian coast. I stood nearby with five or six other people in near darkness, waiting to order drinks and looking out to the street. The patio’s misting system revved up and turned the view of the cityscape beyond into a bright, watery blur. The scene could have been anywhere in the world.

Do you like this newsletter? Consider subscribing to the Los Angeles Times

Your support helps us deliver the news that matters most. Become a subscriber.

At the door with a gin martini in one hand and a watermelon spritz in the other, the mirage evaporated: I was back in the Capri Club nighttime street party crush on a mixed commercial- residential along a wide, bustling stretch of Eagle Rock Boulevard.

The surrounding landscape may not be picturesque, but in June, when owner Robert Fleming reopened a nearly 60-year-old space that once housed the former Italian restaurant Capri – he put up a sign reading “Since 1963” between quotes – he launched what became LA’s destination bar of 2022.

What gave him such instantaneous magnetism? A clever mix of the new-but-retro-cool genre that appeals to Angelenos, coupled with the right timing: We just want to hang somewhere exactly like this. LA has great bars of all kinds, but not an overabundance of them. It’s always been a city with a complex relationship to its bar culture, given its size, emphasis on driving, and the time and thousands of dollars it takes to get a liquor license, to begin with .

When I think back to the most sublime cocktails I’ve had this summer, most were in restaurants, where our star bartenders often thrive and where drinking is part of the whole “night out” experience. I remember Jason Lee’s Suika cocktail at n/soto, where he freezes watermelon juice and shaves it over umeshu pie (Japanese plum liqueur), gentian amaro and citrus using a kakigori ice shaver. I noticed clarified milk punch was having a while in town: Kato bar manager Austin Hennelly makes it the best, a blend of brandy, bourbon and rum with brown butter and boniato, two ingredients which skilfully nod to one of chef Jon Yao’s first signature desserts. .

At Causita, the winner was the Girl From Lobitos – cachaça, Oaxacan rum, vermouth, passion fruit, ginger, lime juice and shiso mousse, resembling a green smoothie but far from the taste of any bar cliché to juice. There was the tequila-enhanced cherry lemonade at Saffy’s and the perfect gin martini at Bar Moruno (which I’d say is more restaurant than bar) that Dave Kupchinsky made from a stronger Beefeater formula that he stored before it was interrupted.

Like many other new joiners, this summer Capri Club joined my list of favorite bars, which includes Thunderbolt in Echo Park, Everson Royce Bar in the downtown arts district, and Juniper on Beverly Boulevard in Westlake. I’ve learned to show up at the Capri Club early in the evening if I want to have any hope of finding a place; anytime after 7:30 p.m. and I resign myself to asking for a spare piece of wall to lean against.

For the largely Italian drink menu, beverage director Nic Vascocu and head bartender Patricia St. Peter focus on spritzes and other lighter cocktails appropriate for the aperitif. The complex watermelon spritz — with vodka, lime juice and prosecco joining the watermelon juice and liqueur — especially helped stave off the recent brutal heat. Fleming says the drink will soon be retired for the season and replaced with an alcoholic version of a Shirley Temple. There is always a classic, well-balanced Negroni.

Francesco Allegro consulted on a menu of snack foods. His main gig is that of a pasta ace in Rossoblu; the variations on fried pasta he’s created for the Capri Club sometimes end up mushy, but otherwise dive into casual arancini, eggplant parmesan, sugo meatballs and smoked tuna with burrata. The plates are small and fit only the lightest meals; plan a full dinner elsewhere.

The array of amari, served in forms that include 50/50 shots of Fernet-Branca and Branca Menta, makes me want the Capri Club to be quiet enough to serve as a post-dinner relaxation stop. Maybe when the summer crowds calm down? Doubtful, and that’s good. The place deserves its success.

The LA Times Food Bowl 2022 is in full swing

The LA Times Food Bowl is in full swing, with events throughout the month. There are tickets left for a collaborative dinner with Kinn from Koreatown and Chief Kevin Lee; a four-course tasting menu of Mexican dishes accompanied by agave liquor, hosted by Corissa Hernandez of Nativo and Jocelyn Ramirez, chef of Todo Verde; and, of course, the Food Bowl’s three night night market event.

— This week’s review focuses on Saffy’s in East Hollywood, which I mentioned above for its cocktails. This is Ori Menashe and Genevieve Gergis’ third restaurant, and it’s predictably fantastic. Start with the Lebanese pine nut hummus (their origin is important, I promise).

– In the last episode of “The Bucket List: Dumplings”, Jenn Harris learn about Japanese gyoza – both how to make them and who serves their favorite dishes in LA