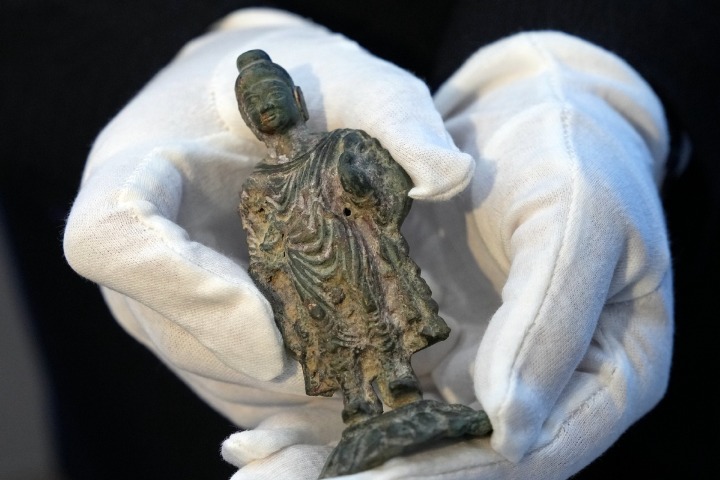 Administration gets tough on thieves, uses technology to provide protection

About 3,000 cases related to the theft and illegal excavation of relics have been solved in 2021, and 650 gangs have been arrested during the campaign launched by the administration and the Ministry of Public Security to combat these crimes.

Of the 62 main suspects in cases related to cultural relics on the country’s top wanted list, released by the Ministry of Public Security, all but one had been arrested by the end of last year.

“This powerful campaign to safeguard cultural relics will remain a deterrent to criminals and support future reform in the circle of cultural heritage,” Song said.

A lost volume of a Tang Dynasty (618-907) Buddhist sutra and six other valuable ancient books, which were stolen from the Sichuan Provincial Library in Chengdu in 2004, have been recovered from an auction house l year after continuous research.

In Hangzhou, capital of Zhejiang province, a robbery of the mausoleum of Qian Liu, the founding monarch of the regional kingdom of Wuyue in the early 10th century, shocked the public in 2020. Last year, the two grave robbers were arrested and sentenced to life imprisonment. The 175 relics stolen from the mausoleum have been recovered.

Grave robbery is one of the most common types of cultural relic cases, but the battle to defend heritage spans a much wider theatre.

For example, in Zhangzhou, Fujian province, 19 people suspected of stealing relics from an ancient shipwreck were arrested last year. More than 800 precious pieces of Yuan Dynasty (1271-1368) celadon pottery have been recovered.

New technologies such as satellite remote sensing, drones and big data analysis are being used to monitor violations against cultural relics.

In 2021, remote sensing was used by the national administration to monitor more than 70 key heritage sites in Hebei, Hainan, Shaanxi and Qinghai provinces, and Guangxi Zhuang Autonomous Region, and 158 pieces of evidence related to violations, including mismanagement by administrators, have been detected.

Smart monitoring systems are also being adopted by cultural heritage departments. Drones are used to patrol cultural heritage sites in provinces such as Shanxi, Henan and Zhejiang. In the Inner Mongolia Autonomous Region, all 103 county-level administrative regions use drone patrols for relics.

“Technology can make up for the lack of supervisory staff,” Song explained.

Fire is another major threat to cultural heritage sites in China, many of which are wooden.

More than 350 fire prevention projects were implemented at key sites across China last year. Six cases of fires at cultural heritage sites were reported last year, down sharply from 15 in 2020.

Ramzan dishes that have stood the test of time