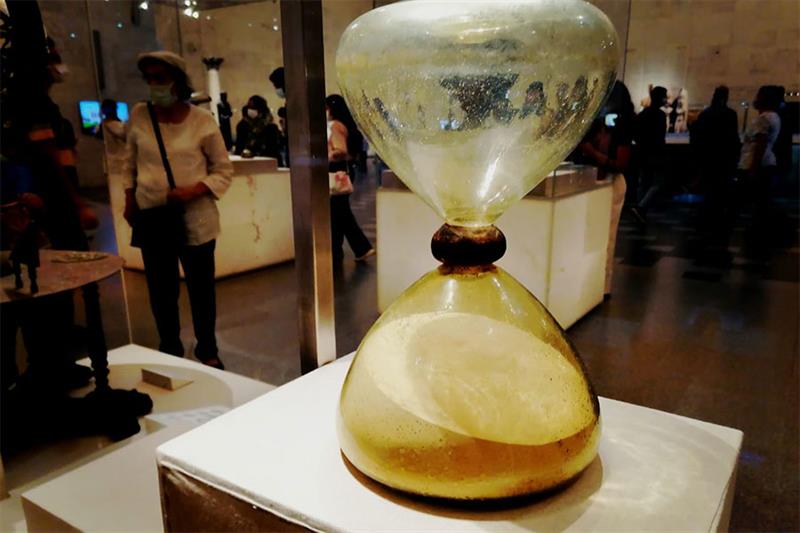 In Photos: 5,000 years of Egyptian heritage under one roof – Special heritage – Heritage

A sand hourglass on display at the National Museum of Egyptian Civilization. Photos by Amira Noshokaty

Set against the backdrop of ancient Ein El-Sira in Fustat, the museum, which opened in 2021 with a huge parade of mummies, showcases vibrant elements from across our culture on many levels.

The three-story building greeted us with the ground floor, the final destination of our Golden Pharos. The rounded hall houses the mummies of our 22 kings and queens, along with their adornments and legendary stories.

These are our ancient monarchs, who were first discovered by Ahmed Kamal Pasha, and escorted to their final location through the lavish, world-acclaimed Golden Parade of the Pharaohs.

The stairs then took us to the first floor, which showcased the medical excellence, crafts and trades of ancient Egypt.

From the papyrus of the famous fable of Sinuhi – one of the finest works of ancient Egyptian literature – to the meaning of the iconic Blue Ankh, or key of life, to the prosthetic toe they successfully implanted surgically, at the delicate surgical tip of instruments that resemble their modern counterparts; all reflecting the great scientific and medical knowledge and skills of the first civilization.

The exhibition also showed remarkable accessories, make-up, board games, the manufacture of wooden boats, colored patched leather tents, and all the elements of the intangible heritage of ancient Egypt, up to a few verses of the Hymns of Akhenaten, in which he addresses the creators, which adorned the walls next to one of his statues: “When you rise on the horizon, the day rises…”

On the other side of ancient Egyptian relics are segments of Coptic and Islamic culture. The exhibition presented astronomy, mathematical theories and discoveries engraved in metal devices that deciphered universal codes and managed to count the hours through grains of sand.

“The astrolabe, which is an astronomical device, consists of a disc, a plate, a net and an observer, and gives a portable model of the universe,” reads the description. .

Next to the astronomy section were equally enchanting masterpieces that we inherited from our Coptic culture and still weave by hand stitch by stitch. The colorful dots that have stood the test of time gracefully and in great shape have recently been inscribed on UNESCO’s list of Intangible Cultural Heritage in Need of Urgent Preservation.

Ferka and kabaty (Coptic) are authentic handmade weaving styles that were passed down from the ancient Egyptians to the Coptic era.

Ferka had many shapes and is known for its vibrant colors, while the Kabaty textile leans towards the white colored cloth worn by most ancient Egyptian royalty – such as Queen Nefertiti. This was the fabric from which the cover of the Muslim Holy Kabba was made and sent to Makkah every year.

The kiswa or cover of the Kaaba that was sent in a grand ceremony from Cairo to Makkah for decades was on display with all its impeccable handcrafted weaving of Arabic calligraphy, along with the mahmal (caravan) on which the Kiswa was kept during the annual feast. procession in Mecca.

Side by side, we also got to see the art of tentmaking in its original form in an old tent on display.

In another room on the second floor, there was an exhibition of authentic traditional Egyptian clothing. The display revealed the variation of styles, from the pure linen of ancient Egypt to the colorful dots of Siwa at Sinai.

He revealed the richness of diversity and roots that put them all in perfect harmony. It also resonated with traces of 5,000 years of multi-layered culture in dots and pimples.

Finally, the upper floor was dedicated to jewelry and clothing left by the descendants of Muhammad Ali Pasha, which included various military and police uniforms.

How the Japanese Appetizer Salad Became a Meal Starter Staple

14 differences between American and European supermarkets