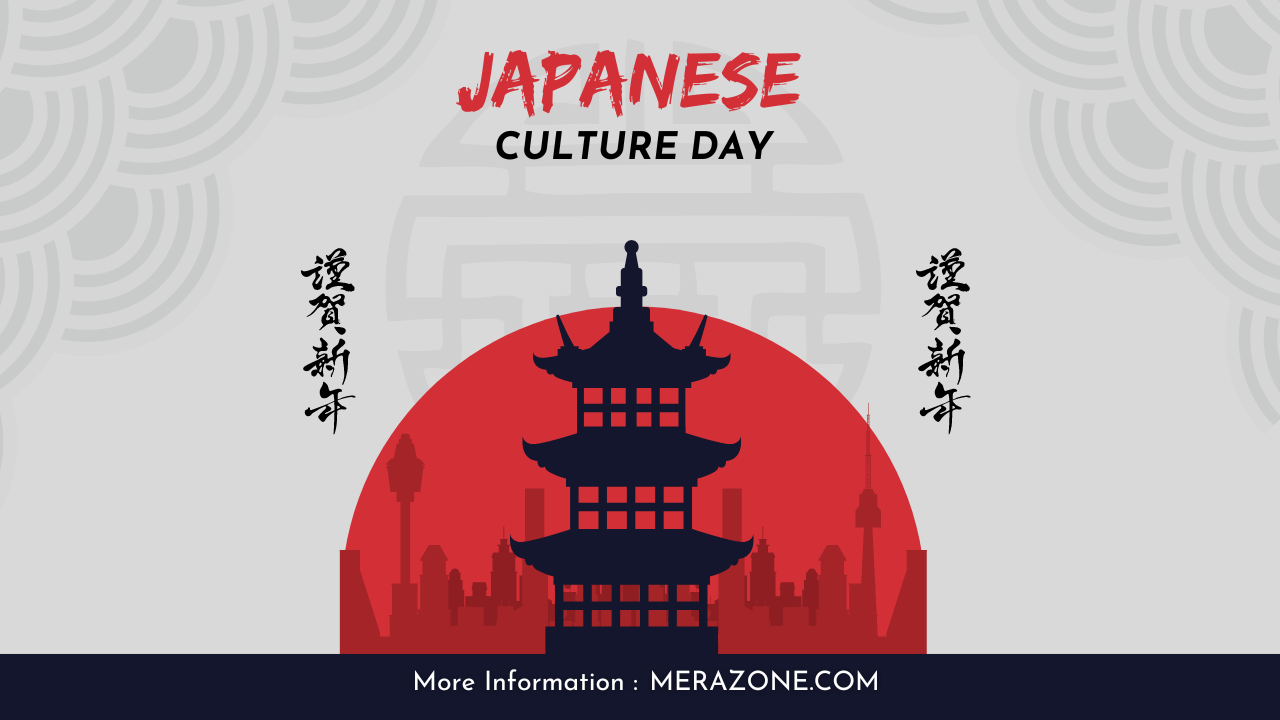 In Japan, Culture Day is celebrated on November 3 every year. The constitution of Japan has established this day as a national holiday. This day is also known as “Bunka no Hi” and primarily celebrates Japan’s culture, academia, and arts.

This national event is celebrated to honor traditional Japanese culture and promote the notion of peace and freedom declared in the constitution of Japan.

It has been a public holiday since 1948, but officially adopted in 1946 after World War II. The first week of November is known as Education and Culture Week, where events related to education and culture in Japan are held to deepen the interest and understanding of the general public, with the participation of schools and universities across the country.

Japanese culture is one of the oldest cultures in the world and it was influenced from antiquity to the Middle Ages mainly by several Chinese dynasties, with substantial derivation from the Tang dynasty, and to a lesser extent by other countries. Asians. For example, one of the writing scripts in Japanese is made up of Chinese characters (kanji), but Japanese has no genetic relationship to Chinese. Since the Meiji period, Japan has been mainly influenced by Western countries.

The people of Japan experienced a long period of relative isolation from the outside world for over 220 years during the Tokugawa shogunate until the arrival of the “black ships” and the Meiji period. Today, Japanese culture is one of the most influential cultures in the world, primarily due to the global reach of its popular culture. In 2021, U.S. News & World Report ranked Japan’s cultural influence as the highest in Asia and 5th in the world.

November 3 has always been a significant date in Japanese history. It was the birth date of Emperor Meiji, who ruled Japan from 1867 to 1912, his reign ended after his death, but it only became a national holiday in 1927, known as from Meiji Setsu Day to honor the late emperor until it was changed to Culture Day after the Japanese surrender in World War II. Culture Days celebrations are not held strictly on November 3, but can span a few days.

After the Japanese defeat and surrender in World War II, the new Japanese constitution officially replaced this day with Culture Day in 1946. However, it has been celebrated as such since 1948 as a public holiday in the country. Since then, this day has been celebrated with great enthusiasm and joy by Japanese people all over the country, celebrating their rich culture and traditions and spreading a message of peace and love across the world.

Culture Day, otherwise known as “Bunka no Hi”, is a day to honor traditional Japanese culture. On this day, the Japanese honor the country’s rich culture, education and arts. Exhibitions, parades, performances and festivals erupt in many cities, with large crowds present across the country. Culture Days celebrations are not limited to November 3 and continue for a few days. The various festivities held in different places in Japan encourage people to engage with their culture, and museums across the country are free to visit on culture day so that people can learn more about their culture and country.

Culture Days is statistically one of the clearest days of the year in Japan. Between 1965 and 1996, there were only three rainy years in Tokyo during Culture Days. It’s a great day to immerse yourself in Japan’s rich history and culture, as most museums in Tokyo and the rest of the country are open for free on Culture Day, giving visitors a great opportunity to discover Japan’s rich cultural heritage. day when it also serves as a tourist event in the country.

The significance of this day lies in the fact that it celebrates the freedom and peace of the nation while proudly displaying its cultural heritage. This day was announced after World War II and the constitution of Japan was also announced on this day. So this day has a lot of meaning behind its celebrations. It is a day that celebrates and honors Japan’s rich cultural heritage and also serves as an opportunity for others around the world to take a look at Japanese culture by delivering a message of peace and cooperation in the world.

This day is also a great opportunity to promote Japanese culture around the world. The constitution of Japan pledges to promote the culture of Japan. Japan’s culture is so rich and unique that it should be promoted around the world. Many award ceremonies and festivals are held on this day to promote Japanese art and culture. The major festivals on this day are an enjoyable and unforgettable way to experience Japanese culture. All in all, we can say that it is a very fun celebration for the Japanese people as well as for visitors.

During Culture Days, festivals are held across the country celebrating traditional Japanese art. There is also a long parade in Hakone town where people wear traditional clothes from the Edo era. At the Meiji Shrine (named in honor of Emperor Meiji), various martial arts demonstrations are held throughout the day.

Many prestigious award ceremonies also take place on this day, including the largest at the Imperial Palace in Tokyo, which honor the contributions of individuals promoting Japanese culture. In addition, this day is important for universities and students. Schools display the works of their students to show off their talent.

The Culture Days parades and festivals are a sight not to be missed. The Tokyo Jidai Matsuri, or “Festival of Ages”, is celebrated near Sensoji Temple in Tokyo, and it is a big draw for locals and visitors alike. People dress in various period costumes (usually the Edo period). Samurai warriors, geishas, ​​daimyos and others parade through the city streets.

In addition to the Order of Culture, other culture-related award ceremonies are held around Culture Day in Japan. Since 1946, the National Arts Festival of the Cultural Affairs Agency (ACA) has been organized with the aim of enabling a wide segment of the public to enjoy Japan’s outstanding works of art, to encourage creativity and to develop the arts.

1. When is Japanese Culture Day celebrated?

Japanese Culture Day is celebrated on November 3 every year.

2. What is special about Japanese culture?

The architecture, art, traditions and crafts of Japan. Also, its world-famous pop culture (including manga, anime, and video games). It’s something that only Japan can offer. No other country has the same characteristics.

3. Why is Japan the best known?

Japan is famous for its natural sights like cherry blossoms and Mount Fuji, advanced technology like Japanese cars and high-speed trains, wacky inventions like karaoke and vending machines, cultural values ​​like politeness and punctuality, its popular anime and manga and its mouth-watering foods like ramen and sushi.

The subtle & diverse flavors of Karnataka