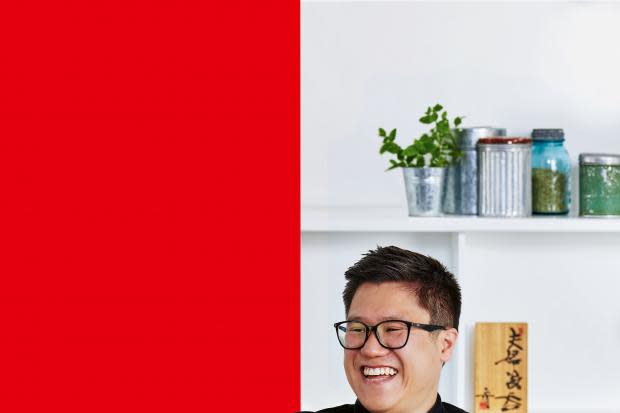 Jeremy Pang on the humble wok, and why it’s so important that we use it correctly

The TV The chef chats with Lauren Taylor about the humble wok and why it’s so important that we use it correctly.

A wok is something many of us have in our kitchen cupboards — yet most people don’t really know how to use it, says Jeremy Pang.

The Chinese-British chef – who runs the School Of Wok in London and is a regular face of Saturday Kitchen and Ready Steady Cook on TV – says: “The mass market mindset on Asian food is markedly more educated today than 10 years ago, but the basic knowledge of what a wok is and how it should be used is still quite low. [There’s] not deep enough education around this main equipment that more than a billion people use in China.”

Born in the UK to Chinese parents, Pang spent two years growing up in Singapore (“Where I really found my love of food,” he says) and later in Hong Kong, but spent the majority part of her childhood in the UK – while ‘having the best of both worlds’ by traveling extensively through Asia.

Growing up in a “foodie family” – he hails from three generations of Chinese chefs – it was his father who encouraged him to pursue a career in catering before he died in 2009. “He and I had a few arguments that year; I did a three-month internship at Le Cordon Bleu, then I went back to marketing for an electronics company. And he said to me: “What’s the point? Why did you go for this course if you’re not going to go straight into the world of food?’ I guess I didn’t trust myself. But then when he died, I practically lost my job the day of my father’s funeral. A few weeks later he started teaching people how to cook Chinese food at home – and in 2012 he opened the first permanent location for his cooking school in London.

In her third cookbook, School Of Wok, Pang shares many of the receipts and the practices he teaches in school – weaving his way through Chinese, Korean, Japanese, Thai, Vietnamese, Singaporean, Malaysian and Filipino dishes. “It’s a nice nod to the wonders of Asian cooking – and bringing it home without too much stress,” says Pang.

Basically, every recipe needs a wok, and it turns out, we may have used it wrong. Here are some of the mistakes you could make…

A lack of preparation

The cardinal sin of stir-frying is tossing the ingredients into a wok before you’ve prepared everything. That’s why Pang came up with a concept he calls “the wok clock”: place all of your pre-measured, ready-to-use ingredients on a plate in the order you’ll add them to the pan – at 12 o’clock. clock, 1 o’clock, 2 o’clock, etc. – before you even think about starting to cook.

“It helps people separate them and simplifies the whole process, which leads to much faster cooking,” says Pang. “It’s like the School of Wok version of mise en place [meaning to prepare and organise your ingredients] in French cuisine.

“Suddenly cooking becomes a lot more enjoyable and a lot easier – and should be a lot faster.”

A stir-fry may be a go-to meal for college students, but it’s gotten an inaccurate reputation for being simple. Yes, stir-frying is quick (“One of the first rules of stir-frying is that if it takes more than five minutes in a wok, it’s not a stir-fry,” Pang says) — but that’s a challenge in and of itself. .

“There are so many intricacies to making the perfect stir-fry,” he says. “What’s difficult is that it happens so quickly, it’s very difficult to learn the intricacies of it in such a short time.”

“You have to get used to the high heat!” said Pan.

“One of my catchphrases is never lose your sizzle – if you don’t hear something sizzle, especially a sauté, then you’re not sautéing – you’re boiling.”

There are several ways to cool the wok, according to Pang. “Number one is stirring, number two is folding your ingredients around the wok, number three is wok tossing (essentially like flipping a pancake – push forward and a quick swipe backward) and fourth, which a lot of people laugh at, is what I call tongue in head (essentially like making an omelet, stirring with your spoon hand and shaking with your left hand).”

The third and fourth ways to cool the wok happen very quickly – “In seconds”, he says – and many home cooks fall into the mistake of accidentally lowering the temperature of the wok, when they don’t. do not want.

Adding new ingredients will also cool the pan. “If you wait 30 seconds between adding each ingredient, then each time it’s more likely that it’s turned the heat up in the wok again,” he explains. “That 30 second wait makes a huge difference to finishing the stir fry.”

Understanding how a wok can cool will help you instinctively control the heat. Pang says, “That’s what we call in Chinese or Cantonese, ‘wok hei’ – the literal translation is ‘wok air’.

“If you understand your wok hei – how to circulate the air around the wok – then you are a good wok master.”