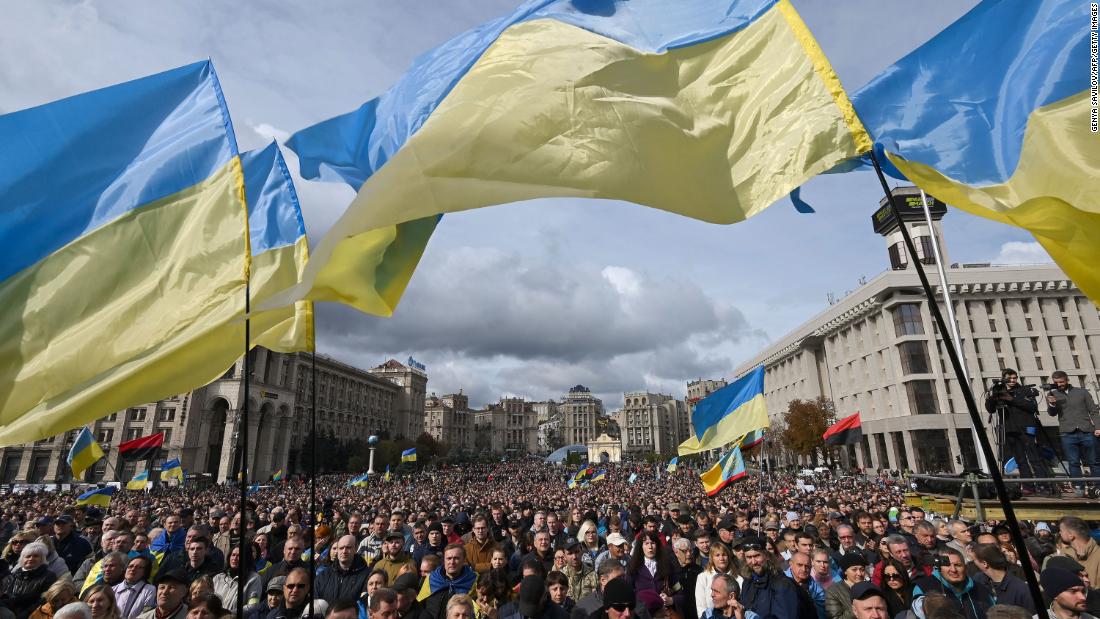 Opinion: I never considered the importance of my Ukrainian identity – until now

Nothing about my campus life seemed to matter anymore. After all, how could he in the face of the destruction of my homeland? How could I sit in my dormitory, lined with photos of my childhood in Kiev, while the city and its surroundings were bombarded by Russian artillery?

I couldn’t live my life as anything else – a student, a friend – until I could exist peacefully as a Ukrainian. And so about a week into the Russian invasion, I left behind my “normal” student life at Stanford to stand up for what matters most: Ukraine.

I booked a flight to Krakow, Poland, to join my Ukrainian friends in the war effort. We have no shortage of things to do here – we help with humanitarian aid, work to protect cultural sites and help incoming refugees.

This struggle for existence is at the heart of today’s Russian war against Ukraine. Beyond territorial conquest, geopolitics and so-called “denazification”, this is a war that calls into question the very existence of Ukraine and Ukrainians as an independent and sovereign people. It is also the continuation of a Russian war that has been going on for centuries against all of us.
One of the first attempts to Russify Ukraine began in the 17th century, after the Pereyaslav Articles of 1659 were signed between the Ukrainian Cossacks and the Russian Tsar. The treaty restricted Ukrainian autonomy by prohibiting Ukrainian colonels from being elected or conducting their own foreign policy without the prior consent of the Moscow government.
In 1720, Russian attacks on the Ukrainian language began, with the banning of printing books in Ukrainian in some cities. The educational reforms of Alexander I in 1804 banned the Ukrainian language in schools, both as a language of instruction and as a subject.
Every century since then, Russian leaders have continued their efforts to erase Ukrainian identity by attacking the use of the Ukrainian language, banning Ukrainian literature, persecuting Ukrainian cultural leaders and destroying any attempt by Ukrainians to preserve their heritage.

This war is no different.

Although I was incredibly lucky to have grown up in an independent Ukraine, I was not immune to Russia’s historical and cultural war on my identity. Most of the years I spent living in Ukraine I was deeply disconnected from my own history and culture. I hadn’t realized that my life in Kyiv was particularly unique — that the Ukrainian experience was something in itself.

I went through life not understanding that being Ukrainian meant anything. It didn’t help that when I moved abroad, a large majority of the people I met didn’t know anything about Ukraine. I found myself resorting to “it’s next to Russia” or “it was part of the Soviet Union”. It seemed to be the only part of my identity, of my nation’s history, that was recognizable to me.

As a teenager trying to figure out my place in the world, it was confusing. Who are the authors, artists, cultural and political personalities of my country? What were their accomplishments? And who, quite simply, are the Ukrainians today?

The search for Ukraine has become a process of self-discovery.

My big eureka moment came during one of my classes at Stanford – “Ukraine at the Crossroads”. Most of the course was about learning Ukrainian history, much of which was relatively familiar to me (although you can never learn too much about history). One week, however, I walked into class and the subject was the Ukrainian avant-garde movement. We discussed Kazimir Malevich, Ukrainian-born painter and founder of the Suprematist movement.

Malevich is one of the most iconic artists in history. I had seen his paintings widely discussed, studied and revered. And yet, I did not know that he was born in Ukraine. I didn’t know he was ours.

At that moment, I realized that Ukraine had been with me all the time – in galleries, bookstores, museums and theaters. I just couldn’t see past the Russian labeling of many of these Ukrainian-born cultural figures.

The more I studied the Ukrainians whose heritage had been erased, the angrier I became. Russia is building monuments to our great leaders in their cities, claiming them as their own cultural heritage. They write about our most iconic artists as if they were their own.
How could Russia take that away from us? How could Russia deprive me of all the reasons I had to be proud of my country? How could Russia make me believe that Ukrainians have no impact or voice in the world?

Putin’s invasion of Ukraine has once again challenged the idea that Ukrainians are a distinct people. And yet, today, with abundant access to information and historical truth, we have a better chance than ever to finally debunk Russian historical myths and cement Ukrainian sovereignty once and for all. Each of us can play a role.

Educational institutions, galleries, museums and cultural institutions can be a platform for Ukrainians and Ukrainian artists to have their voices heard and their stories properly told.

So, let’s have this conversation. Let’s start bringing Ukrainian culture and history out of the centuries-old imperial shadow. This is how we win the long war against Russia – cities may fall, territories may be destroyed, but Ukraine and its truth must prevail.