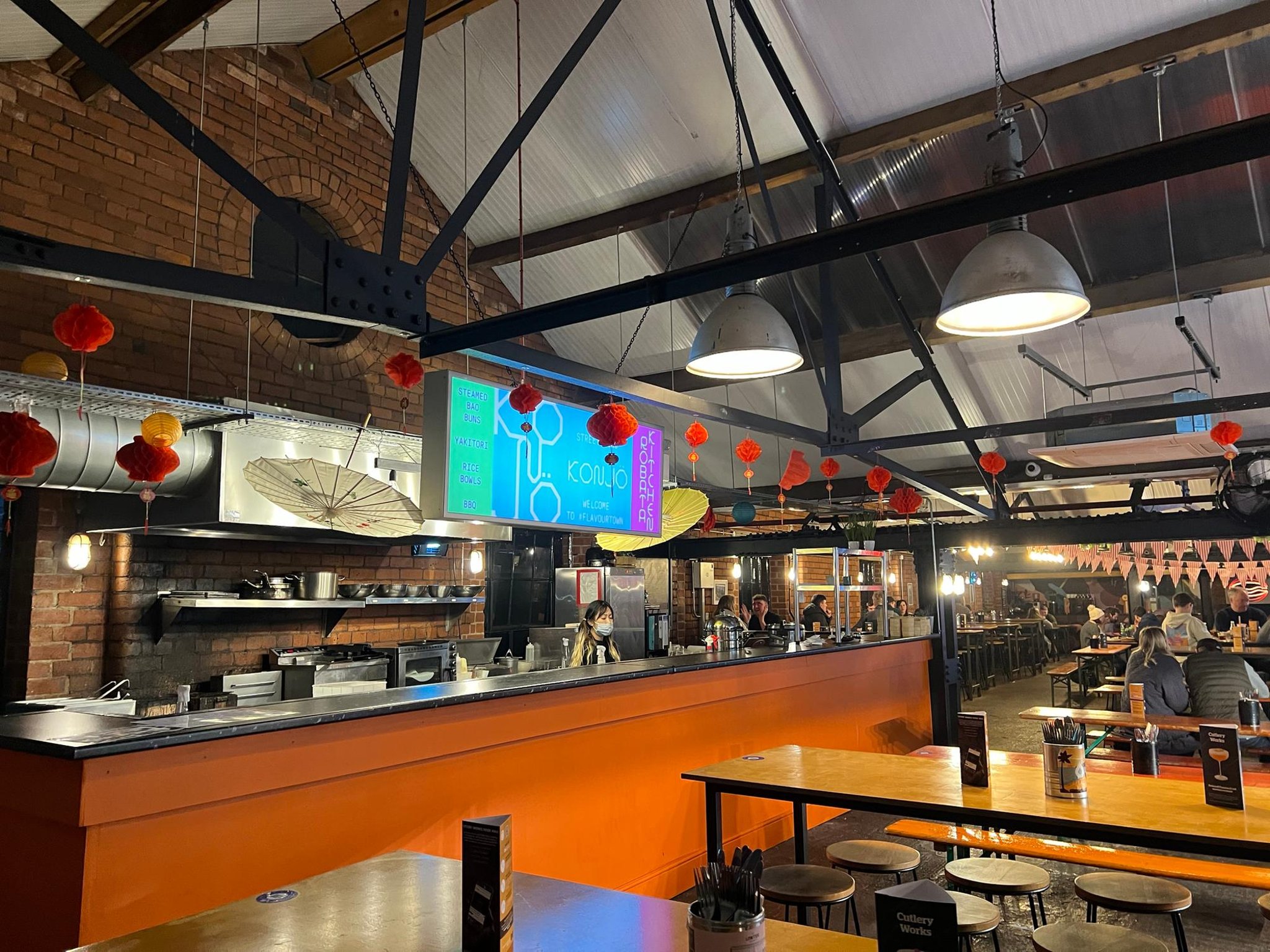 There are a number of reasons why Sheffield’s Cutlery Works is so popular, not only is it part of a thriving and evolving community in the popular Kelham Island area of ​​the city centre, but it’s a great location for a selection of dishes inspired by several cultures and cuisines from around the world.

This time around I decided to go to Konjo, the laid-back spin-off of the critically acclaimed Joro restaurant – understandably expectations were high. Konjo Robotayaki cuisine is a mix of Scandinavian and Japanese inspired cuisines with a street food twist of Joro’s signature flavor. I have a confession to make though, I had tried food from here before so was looking forward to returning to try a selection of dishes. To really tickle my taste buds, I decided to start with a selection of bao buns, because who doesn’t love a good bao?

After about 15 minutes we were given a selection of three bao buns to sample, the first was the Char Siu Pork, a Moss Valley pork neck cooked on the authentic Japanese Konro BBQ, smothered in roasted plum sauce and a puffed pork rind. It was a nice introduction to the bao buns on offer, tender pork, perfectly complemented by the roasted plum sauce and the puffed pork rind that looked like a pig-flavored quaver. It was lovely.

Register to our daily newsletter

The newsletter mute the noise

A trio of bao buns from Konjo at the Coutellerie

Then there was the BBQ mushroom, the only vegetarian bao option in Konjo. Includes shiitake mushroom, hoisin sauce, koji emulsion – created by slowly whisking koji oil – iceberg lettuce and pickled cucumber. Of the three bao rolls I ordered, this was the most disappointing, lacking flavor, density and consistency. It was just a bit bland really. Quite disappointing.

The Katsu Chicken bao won the crown as the most beautiful of the three, crispy chicken katsu. The chicken was succulent with a nice crispiness, retaining the juices in a well balanced combination of crunch and moisture, pairing perfectly with the Japanese mayonnaise. In a word (or two), deliciously indulgent.

Moving on to the main course this time around, we opted for two of the main courses choosing the Gyūdon and the Butadon Rice Bowl. I had decent expectations for the Butadon rice bowl, as the last time I tried a rice bowl here was the very excellent chilli beef, as well as the Korean fried chicken, both were just plain delicious.

The Butadon Rice Bowl comes with Tare Glazed Moss Valley BBQ Pork (a flavored glaze), Koshihikari Rice, Burford Brown Egg Yolk, Chives, Radish, and La-Chilli Oil. yu. The pork was pretty good, tender presentation came together really well, except for the Koshihikari rice, it just didn’t taste good, it was supposed to be chewy and slightly sticky. Unfortunately, its texture was not good, hard and biting… as if it had been undercooked.

The food is always presented impeccably.

Our rice woes continued with the long-awaited Gyūdon, a £14 Bavette beef steak – read: flank steak – cooked on the aforementioned authentic barbecue, koshihikari rice, onions cooked in wagyu fat dashi, a another characteristic of the Burford brown egg yolk, served with crispy shallots. Crispy onions added a delicious crunch to the tender slices of Bavette rose beef, which was honestly delicious. Unfortunately, the dish was again let down by the Koshihikari rice. Sure, I could complain to the chef and point out my issues with the food, and in almost all cases you should. But time was running out and I couldn’t wait for a replacement dish.

Maybe I was annoyed by the disappointing BBQ mushroom bao and the disappointing Butadon rice bowl, in fact the rice in general was a huge disappointment, but I just couldn’t avoid the nagging feeling that it was so better when I had tried the food here before. Of the main dishes, the Gyūdon was the best only because of the flank steak with the crispy wagyu onion toppings. In total the meal was £41.00 not including drinks ordered from another of the outlets. It was for three bao rolls for starters and two bowls of rice for main, which is not too bad and about average.

Although this time may not have been the best, Konjo is more than capable of serving up delicious food, and that was great in my previous experience, but this time around he didn’t have it all fully met expectations.

From left to right, Gyūdon (with Burford brown egg yolk) and the Butadon Rice Bowl.
At £14, the Gyūdon is the most expensive dish on the menu.