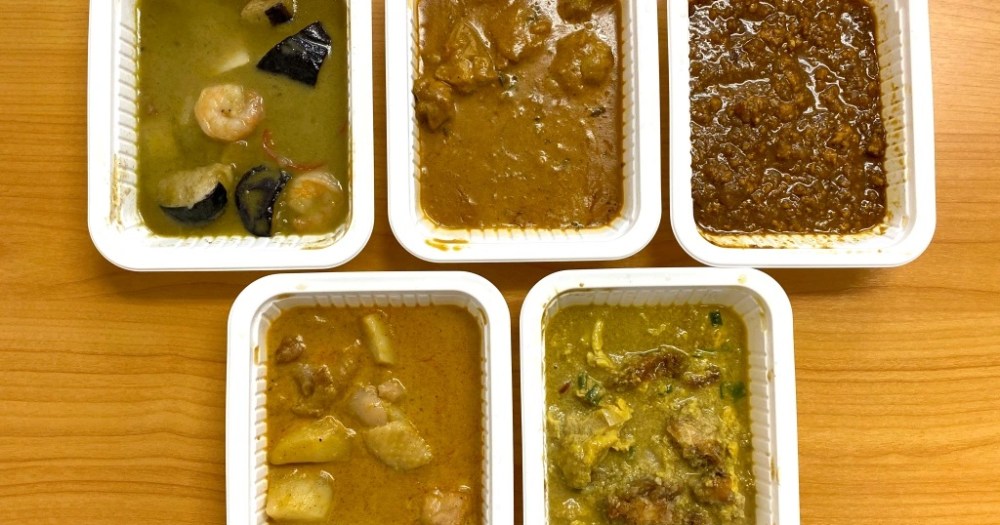 Frozen curry may not sound appetizing, but 7-Eleven can do anything good.

We love what 7-Eleven Japan has been offering lately, whether it’s delicious smoothies you can mix yourself or Zero Cider Triple drinks.

In recent news, our Japanese-language reporter PK Sanjun noticed an advertisement for 7-Eleven’s frozen food section and saw that they apparently had renewed their frozen curries in April.

Since he hadn’t tried them before, he decided to see if they were any good – although he didn’t exactly have any doubts. here are the five types he rounded.

He decided to try all five for a graded taste test. The recipes for keema, butter chicken, massaman and green curry were renewed in April, but since he had never tried the sautéed crab curry before, he decided to try that one as well.

▼ He also had no intention of eating it plain.

▼ And what curry doesn’t go well with cheese?

He also found another pleasant surprise: they had sides to go with them! They sold jasmine rice for 159 yen a pack and cheese naan for 268 yen each. He could recreate an entire curry restaurant experience in his own home.

▼ They are also very convenient to prepare. Directly in the microwave!

Everything was just begging to be reheated, except for the cheese naan, which also needed a toaster. Still, it’s pretty handy when it comes to frozen foods.

With all the curries and fixings prepared, PK Sanjun was ready to rank these curries from least mind blowing to most delicious.

▼ Ranking: start! Which curry do you think it is?

In fifth place, the butter chicken curry. He marked it as such because he wished it was sweeter. That’s not to say it’s not good, but if you’re like him and enjoy a sweet butter chicken curry, you might be disappointed. The mild taste and spice made up for it.

▼ Next is a Thai-style competitor.

In fourth place, the sautéed crab curry. This Thai curry is also a sweeter curry and consists of crab, eggs and more. PK Sanjun had already gotten the real deal in Thailand, so he was thrilled to see it sold at 7-Eleven. Soft shell crab and flavor was good, but not mind blowing. It’s not complaining, though, especially considering the price.

▼ Can you tell what it is just by looking at it?

In third place was the Massaman curry, a Thai dish inspired by Indian and Malaysian curries. The lemongrass curry was very easy to eat and he thought it tasted better than some restaurant versions. Quite impressive for a convenience store! If you can’t handle a ton of spice, note that PK Sanjun would describe this as having a medium spiciness level.

▼ We can’t say we’re surprised that this popular strain came in second.

The keema curry came second. He could really taste the onion and umami ground meat flavors that define a good keema curry. If you want a really meaty tasting curry, this is the one for you. It wasn’t too spicy and they didn’t skimp on the meat like some other places tend to. A+, 7-Eleven.

▼ The color reveals this one.

And finally, the first place in PK Sanjun’s ranking was green curry. It tasted sweet at first, then dissolved into a pleasant spicy aftertaste. There are plenty of places that can get the delicate balance wrong and tip too far in one direction, but he thinks 7-Eleven did a great job with this one. There was also a good variety of toppings like chunky prawns, eggplant and peppers. He strongly recommends that you take a bag.

Jasmine rice and cheese naan were also very good. The cheese naan wasn’t as rich as it would be in a restaurant, but for eating at home it’s perfectly fine. Jasmine rice goes well with all curries as well.

▼ Can you believe they cost less than 400 yen each?

In conclusion, PK Sanjun didn’t think frozen curries were flops. They all taste really good, and you can get them all for less than 600 yen even if you add a packet of jasmine rice. Try them, you will be pleasantly surprised!

Images: ©SoraNews24
● Want to be up to date with the latest articles from SoraNews24 as soon as they are published? Follow us on Facebook and Twitter!
[ Read in Japanese ]