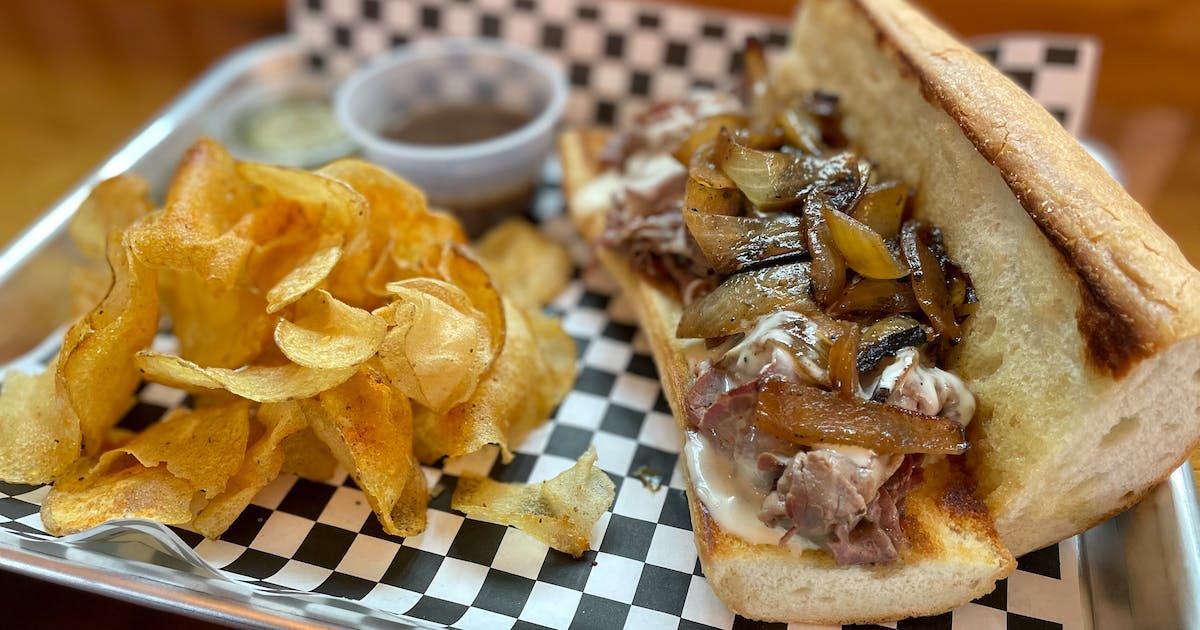 At the start of the Twin Cities food truck revolution, the hunt for good bites became an epic quest of following trucks on Twitter or bumping into them in surprising places. Gastrotruck was part of this early push to cook outside of the usual kitchen and to bring creative dishes to people by way of little paper boats.

Inside the truck were Catherine Eckert and chef Stephen Trojahn. Eckert’s warm hospitality attracted foodies, while Trojahn’s gastronomic skills created irresistible dishes. For years, the two planned to open a restaurant; they even got a pitch. Now, years later, they have opened Carbon Kitchen + Market in this space.

The concept is an idea they briefly tried inside the Graze Provisions + Libations food hall before closing it during the pandemic shutdown. It’s inspired by pit beef sandwiches, something Eckert introduced to Trojahn after tasting it in Baltimore, where the cooking style is more prevalent. All meats in the restaurant are slow roasted over charcoal (hence the name Carbon).

In the French dip, savory lacy meat is layered with charred onions and smothered in a cottage cheese sauce. Housed in crusty bread, the whole thing is drenched in a side of rich juice. It’s a triumph of sandwich achievement. As an accompaniment, perfect homemade fries: thin, crispy, salty and seasoned with a blend of spices that mimics Old Bay.

Beef isn’t the only thing on the menu: there’s also shawarma-seasoned chicken and grilled beets replacing the meat. Although I am so enamored with the French dip that it will be hard not to make it my usual order. (Joy Summers)

As a committed “Golden Girls” fan, I’m the target customer for Wrecktangle’s latest “Crouching Tiger, Hidden Menu” pizza special. But even if you’re not, there’s a reason to get this pie that’s more compelling than just an abiding love for late TV legend Betty White: It’s delicious. Who would expect less from the pizza masterminds at Wrecktangle, who have perfected the art of the cheesy burnt edge and made it a food group in its own right?

The $18 pie, made this week in honor of what would have been White’s 100th birthday, is a white pie, of course. It’s topped with ricotta, a mixture of mozzarella cheese and Oaxaca cheese, then dabbed with pale green puddles of garlic butter. It may not be as sassy as the comedienne herself, but the garlic lingers on like a good St. Olaf story. (Sharyn Jackson)

The word (including that of yours truly) is that since Sanjusan opened in March last year, the brand of “fusion” worn by Sanjusan owners Daniel del Prado and Shigeyuki Furukawa has discreetly imposed. There’s no better time to visit than now.

Beginners should definitely embrace the Italian-Japanese duality that has worked so well with Sanjusan’s pizzas, including the Isaac Becker Tribute (spicy raw tuna, cilantro, lime) and the Verdi, which ingeniously combines miso pesto, burrata, walnuts and parmesan.

But that’s not to say the simple, no-frills pleasures of Sanjusan aren’t worth mentioning. The yakitori, or skewered meats and vegetables cooked over a charcoal fire, retain the kind of char and smoke that I only find in high-flying yakitori joints. All are cooked with precision.

On my last visit, I indulged in chicken drum, meatballs and tenderloin. Each has its virtue: you can feel the fatty parts of the chicken more deeply; another might be cleaner, more lively. These are often served with pickles and a bright, funky dip made with raw egg and fish sauce.

My strong recommendation: order them all and make a meal as you can. (Jon Cheng)

Who knew Minnesota was late to the cream puff party? The little Japanese phenomenon opened an outpost in the Mall of America earlier this month – its 33rd in the United States. And judging by the number of bright yellow boxes circulating, it’s a hit.

Located in the North Garden area of ​​the mall, Beard Papa’s concept is simple. Choose a shell ($4.29-$4.89) – flavors that day were plain, chocolate éclair, green tea, honey and cookies and cream – then choose vanilla, chocolate or tea filling green. The cream puffs themselves follow a proprietary recipe that consists of a double-layered puff on the inside and a pie crust on the outside. They are slightly sweet but sturdy, more than able to hold their own when filled. (The filling is a combination of whipped cream and pastry cream.) I was preparing for a sugar overload, but was pleasantly surprised. Although obviously sweet – it’s a cream puff, after all – it was a nice mid-afternoon pick-me-up.

But about that name. Beard Papa’s opened as a small bakery in Osaka, Japan in 1999. Owner Yuji Hirota’s fluffy white beard was so well known that regulars called him Beard Papa. When the neighborhood kids asked him to create some new treats, he decided to make a pastry “as fluffy and adorable as his beard.” The rest is cream-filled history.

Named after a Canadian pig who escaped the slaughterhouse and became a folk hero, Francis is the new tenant of the food trailer outside Sociable Cider Werks (the same space that launched Yia Vang’s Union Hmong Kitchen). And like its namesake, no animals were harmed in the making of its excellent burgers.

Two impossible patties, faux cheese, bacon from Herbivorous Butcher, and a solid brioche bun come together to make this enormous Meatless Double Bacon Cheeseburger ($19). I couldn’t make half of it, especially with a mountain of super crispy fries on the side.

Like Union Hmong Kitchen, Francis is on a brick-and-mortar course, co-owner Lindsey Johnston said. The owners are looking for a place in northeast Minneapolis.

“Our goal is to have that burger feel, with the malts, shakes and ice cream,” she said. At the truck, you can also get chicken nuggets, chili, loaded fries, and salad. “But we want to keep the focus on burgers and fries and appeal to non-vegan eaters, and do something that’s delicious for everyone.” (S.J.)