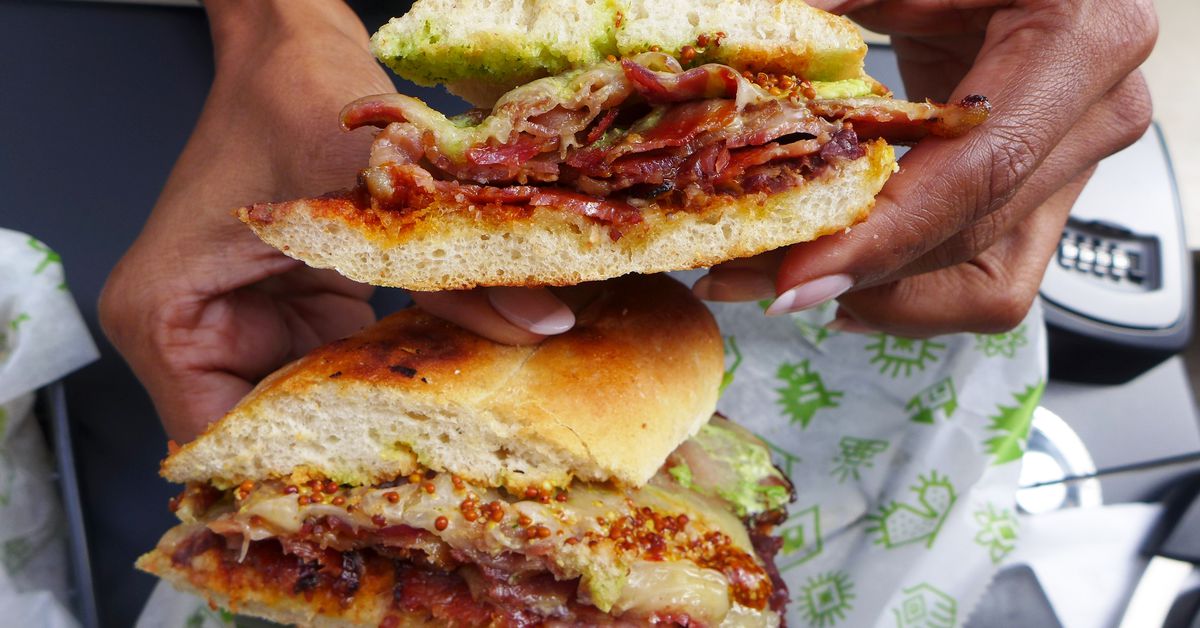 Mexican cookbook author Rick Bayless opened Frontera Grill in 1987, and his chain of Mexican restaurants reached a total of 10 in the following decades. Most were located in Chicago’s River North or West Loop neighborhoods, and operated with the help of longtime business partner Manny Valdes, a relationship that broke last year. Now, with the announced support of the Philippines’ largest fast food chain Jollibee, Bayless recently opened the first branch of its nearly 1.5-year-old Tortazo sandwich shop on Broadway just west of Madison. Square. Besides an establishment at Disney World, this is his only foray outside the Windy City.

Years ago, I often found myself in Chicago on a mission and searched for Frontera Grill and its more expensive sister Topolobampo for a scholarly and somewhat austere approach to Mexican cuisine. Both featured a list of regional delicacies, some unavailable in the taquerias then proliferating on Chicago’s South Side and in suburbs like Cicero, which I also avidly visited. In a gourmet idiom, Bayless’s food was excellent in a quite different way than the taquerias.

So I couldn’t wait to see what Bayless – a white chef born in Oklahoma – would do with torta, Mexico’s favorite sandwich. Arriving on a sunny autumn afternoon, I was surprised to see the enviable real estate that Tortazo enjoys. Its block of Broadway has been cordoned off and traffic is diverted to Fifth Avenue, meaning the restaurant has massive outdoor space. Inside, a few tables, a bar, and counter seating are provided. An equal amount of square footage is taken up by an order counter, and a bustling kitchen is visible through the windows.

Five tortas deploy the classic telera roll with a groove in the center, where the top and bottom of the bread are browned a la plancha. And while tortas have swelled in size in our own taquerias and Mexican sandwich specialists like Torta Neeza and Don Pepe, these are more modest in size. We always make a big meal, but you won’t take half of it home.

The first on the menu is the “crispy chicken milanesa” ($ 14). While the equivalent of a taqueria torta sports vast layers of avocado, bouncy Oaxacan cheese, fried black beans, mayonnaise, lettuce, tomato, onions and pickled jalapenos – making its cutlet. fine part of a glorious ensemble – the chicken cutlet in Tortazo is clearly the preening star of the show. It’s plump and nicely crumbled. He begs comparison with his European antecedent the Viennese schnitzel (although the Mexican nickname credits Milan). The skinny supporting players were fantasized about, so now we have a tomatillo-avocado salsa and modest amounts of shredded Napa cabbage and crumbly cotija cheese.

The latter two toppings are clearly formulated with a longer shelf life in mind, a godsend for a quick and relaxed chain, but despite that hidden agenda of storable ingredients, the sandwich is excellent. On successive visits, I tried two other tortas. The cochinita pibil (a Yucatan specialty of pork marinated in citrus), was just OK. But the torta Cubana ($ 14.50) – invented in Mexico City on Calle Republica de Cuba using pork loin, meat ham, and hot dogs, topped with a fried egg – has been even more transformed by Bayless as the chicken milanesa torta.

Cubana de Tortazo consists of bacon and smoked pork loin topped with invented condiments like coriander cream and chipotle mustard. It’s a BLT on stimulants, and every bite is pure smoky pleasure. Other dishes transferred from the menu of the original Chicago Tortazo include a trio of salad bowls which, while large, are largely forgettable, and three other â€œbowls,â€ which are pretty much indistinguishable from salads, all using ingredients seen elsewhere on the menu like tortilla chips, guacamole, cheeses and, most interestingly, samples of pickled poblano pepper and roasted pumpkin seeds.

Speaking of tortilla chips, these are ubiquitous on the menu, but the other forms of corn that characterize most Mexican antojitos are mostly absent. There’s a wonderful juicy quesadilla with steak and mushrooms ($ 15), but it’s made with a flour tortilla rather than the masa wrap that immigrants to Pueblan have taught us to love.

This is not necessarily a bad thing. Some of the dishes that deserve special attention are the more experimental created for the New York venue. One is a shrimp cocktail that also contains jicama and avocado, with a thick dressing more similar to a sweet dressing than to the lime dip of a ceviche. Another is a solitary tlayuda ($ 19.50) garnished – not with chorizo â€‹â€‹or chicken tinga – but with beets and goat cheese. A strange pair of scissors is provided to break it into edible quarters, and Oaxacan’s famous snack bar is marred only by excess arugula, a quick and boring staple more immortal in its longevity than a god. Greek.

Another anomaly is a full liquor license, something rare for fast-paced, laid-back places. Besides canned beer and wine, you can get quite a margarita. Daily changing soft drinks and fruity drinks are also available. For dessert, there are hot pretzel-chip churros and paletas of different flavors placed in a handy freezer case from La Newyorkina.

So place your order, grab a number on a stick, and find a place inside or outside while you wait 10 or 15 minutes for your order to be freshly made. Unlike any other Mexican restaurant in town, Tortazo offers thoughtful, but sometimes botched, cuisine at a price midway between taquerias and full-fledged restaurants like Atla and Oxomoco. And the new tortas are worth experiencing for themselves.