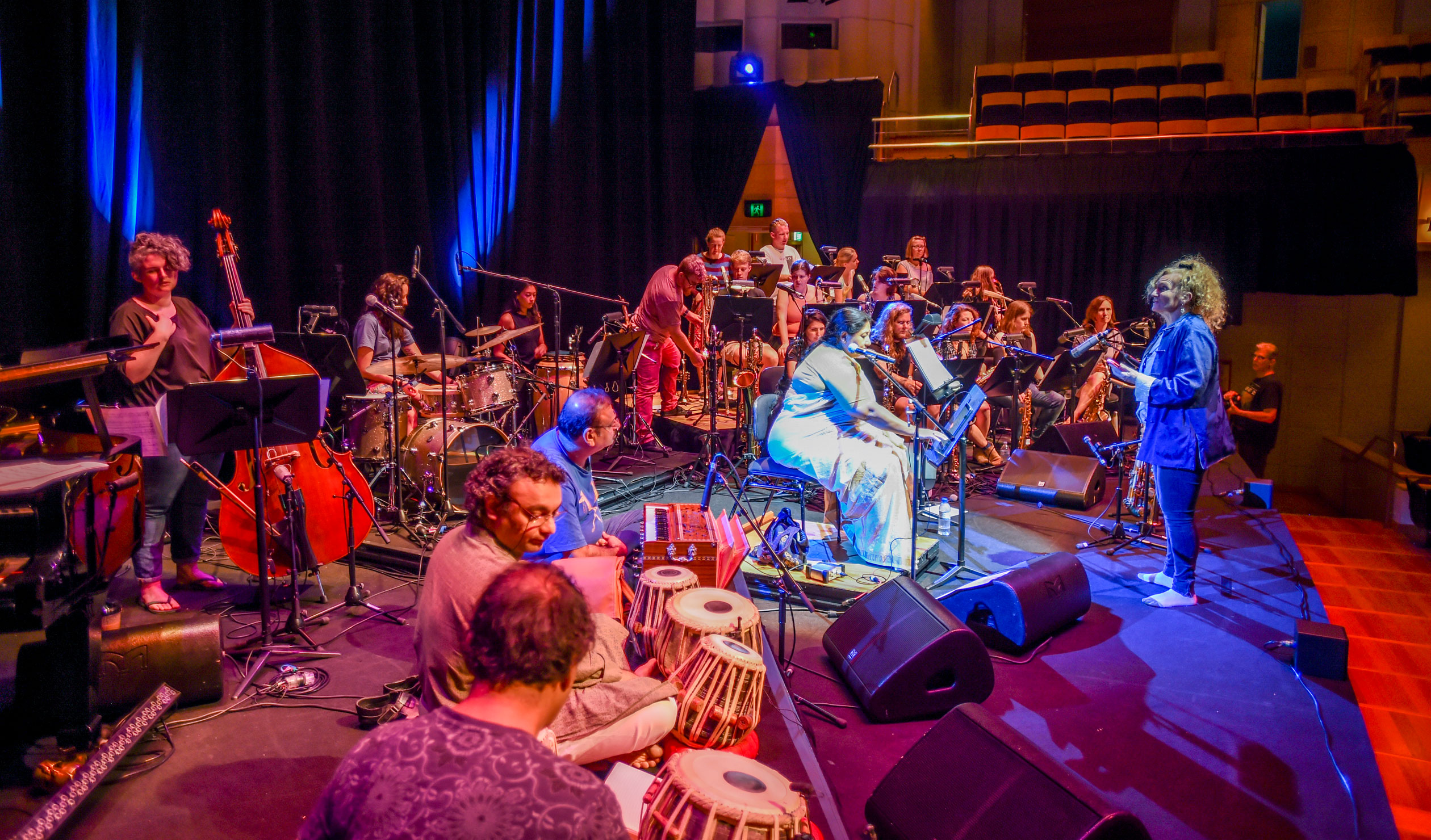 With 22 musicians from Australia and India sharing the stage – including the 17-piece all-female jazz ensemble Big Band Sirens – this show at Her Majesty’s Theater headlines the OzAsia music program. Saxophonist and composer Sandy Evans leads the cross-cultural collaboration, which also includes Indian singer Shubha Mudgal, tabla players Aneesh Pradhan and Bobby Singh, and harmonium virtuoso Subhir Nayak. Bridge of Dreams premiered in Sydney in 2019, with critics praising its seamless fusion of Western jazz and traditional Indian music. You can get a taste of what’s in store here. – Her Majesty’s Theatre, October 27

Gruejarm apparently translates to “any briefly interrupted sleep,” according to the Korean company. websitewhich gives an idea of ​​how this family show blurs the lines between reality and imagination. INSTANTANEOUS is performed by an ensemble of seven, blending illusion, mime and “Chaplinesque vaudevillian comedy” through a story that sees three tricksters stumble through a door where they encounter a variety of mystical characters. It’s been featured everywhere from the Edinburgh Fringe to Broadway, and OzAsia Artistic Director Annette Shun Wah is thrilled to finally bring INSTANTANEOUS in Adelaide for its Australian premiere, saying it will “transport audiences into a magical world”.– Her Majesty’s Theatre, October 20-22

This event will delight the taste buds of lovers of Japanese cuisine and culture. The lunch celebrates the release of the Adelaide author (and regular Review contributor) The poignant memoirs of Katherine Tamiko Arguile Meshi: A personal history of Japanese cuisine – reviewed here – and will see Chef Simon Bryant prepare a series of homemade dishes for guests to enjoy as Arguile shares his story and connection to cooking through his childhood in Japan. Lunch by the river (November 3) will be hosted by journalist Jane Hutcheon, who also presents her own show OzAsia, Lost in Shanghai (October 20-22), which explores her mother’s troubled childhood in pre-Communist China. Arguile and Hutcheon also participate in sessions as part of the festival’s writing and ideas program In other words.

Michael Mohammed Ahmad is well known for his award-winning novels, including Miles Franklin’s 2019 shortlisted novel The Lebs. Now the writer has joined a stellar intersectional creative team to create a physical theater piece that’s part contemporary Australian crime thriller and part magical realism. The demon – which is a co-commission with the Sydney Opera House and playing there this week – sees a Chinese-Australian street fighter draw two detectives during a road trip from western Sydney to the NSW city that has was the scene of the Lambing Flat of 1860-1861 Riots targeting Chinese gold miners. “It asks if something ugly and unresolved from our history is causing the ongoing friction we have today,” says Annette Shun Wah. – Dunstan Playhouse, October 20-22

dark tale The demon pushes the boundaries of magical realism.

Audiences will be transported to the coastal cliffs of Robe in this unique dance performance featuring contemporary dancers, a live musician, moving cameras and drones. Created by choreographer and filmmaker Sue Healey, The long walk is a tribute to the thousands of Chinese miners who docked at Robe in the 1850s and embarked on an arduous trek to the Victorian goldfields. The performance will be streamed live, via real-time drone recording, to the Space Theater and to audience members watching at home. In a recent interview with Review, Healey said the work offers a different perspective on both filmmaking and performance: “The whole thing is incredible, advanced, instantaneous artistic creation, and it’s incredibly exciting. It’s really terrifying too! – Space Theater, October 23

“Brilliant, hilarious and surprisingly moving” is how State Theater Company SA Artistic Director Mitchell Butel describes the play, which was included as part of the OzAsia program and is the company’s latest production in 2022. Single Asian Woman was written by Michelle Law (whose credits include TV shows Homecoming Queens and rosehaven) and revolves around two generations of women in a family running a Chinese restaurant on Queensland’s Sunshine Coast. It is directed by Nescha Jelk with a cast including rising star Juanita Navas-Nguyen (Who’s Afraid of Virginia Woolf?). – Dunstan Playhouse, November 4-19

The Adelaide Season of the Dolly Parton Musical Tour 9 to 5 meant the Festival Theater was unavailable as a venue for OzAsia’s shows this year, but in a neat twist, Shun Wah took inspiration from the show to program a series of exhibitions and performances around the theme of women. at work. Exhibits include Batik Sangiranwhich celebrates the role of batik artisans from Indonesia’s Sangiran World Heritage Area in preserving the history and culture of their community, and Art, not warwhich offers a change of scenery to see the work of the Afghan graffiti artist up close Shamsia Hassaniwhose art highlights the challenges faced by women in her country. – Galleries and foyer of the Théâtre du Festival, from October 20 to November 6

If you’re looking for laughs, it’ll be hard to pass up this special that features eight Asian-Australian comedians and performers. Hosted by Jennifer Wong (Curator of In other words writing and ideas program, and ABC presenter Chopsticks or fork?), it features a line-up including Lizzy Hoo, Jason Chong, Michael Hin and Adelaide musical duo The Coconuts (Leela Varghese and Shabana Azeez, who describe themselves as “a bit like Flight of the Conchords with just under facial hair”). – Her Majesty’s Theatre, October 29

Your support will help us continue the important work of InReview in publishing free professional journalism that celebrates, questions and amplifies the arts and culture in South Australia.