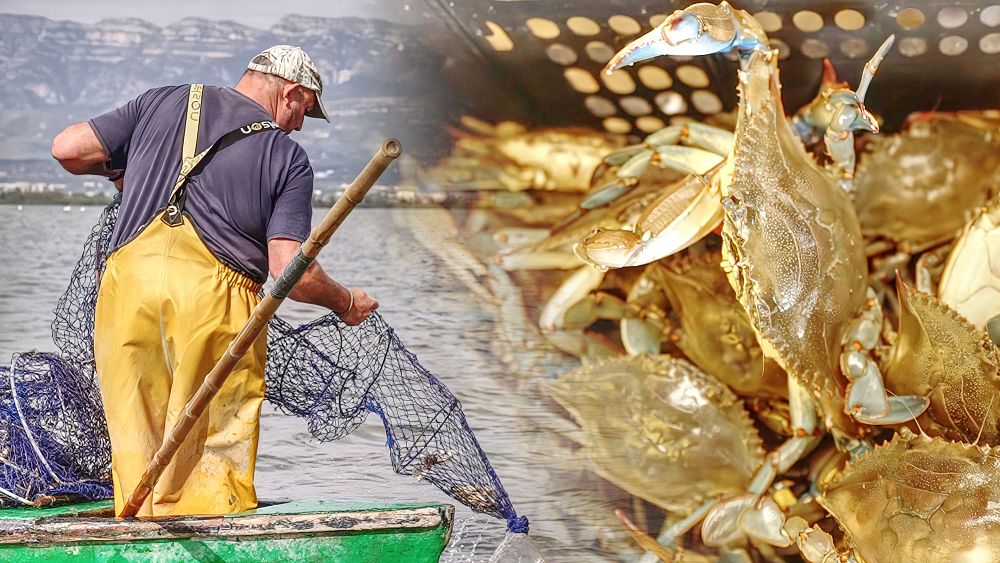 Managing the growing number of non-native species in the Mediterranean

Hundreds of non-native species have invaded the Mediterranean Sea over the past decades. Today, they are altering local biodiversity, disrupting fishing and aquaculture throughout the region. But some of these invasive species generate business opportunities for the fisheries and aquaculture sector.

The Rise of the Blue Crab

The The Ebro Delta is the largest wetland in Cataloniahome to hundreds of aquatic species and a place with a long fishing tradition.

For centuries, the local association – ‘Brotherhood of San Pere’ – has been fishing in the largest lagoon, the Encanyissada. But a few years ago, their usual catches suddenly dropped. Instead, they found a surprising newcomer: the blue crab, a ferocious North American crustacean that has invaded the area, decimating local species.

With the other species having largely disappeared, local fishermen have turned to catching blue crabs.

“In the early years they were plentiful but not very expensive. Now it’s the opposite: less but worth more. But hey, that’s the fisherman’s life,” says Raul.

Allowing commercial fishing of these new crabs is the best hope of stopping a population explosion, local researchers say.

Catalonia has set up a special co-management committee with the aim of providing better scientific advice, improving catches and streamlining trade in blue crab through the fishing market.

This part of Spain is closely watched by other regions, increasingly affected by blue crab invasion.

“We have to solve problems with knowledge. And this knowledge comes from all parties involved in the problem – that is, fishermen, fisheries administration and also scientists, but also NGOs”, Pere Abelló, senior researcher in crustacean biology, ICM-CSIC, says.

A few reasons to be happy

Catalonia’s innovative technology and large-scale fishing infrastructure appear to have had an impact: its blue crab population has apparently stopped growing, although further study is needed.

Either way, the invasive blue crab, likely brought from America in the ballast water of commercial ships, is here to stay.

“At this time, it must be said that eradication of this species is virtually impossible due to its inherent characteristics. But our goal is to be able to control the population to minimal levels, allow other species to recover, and thus allowing fishermen to benefit again from all the resources they had before,” says fisheries biologist Verónica López.

A major benefit is that blue crab tastes good, so intensive fishing of the species is a win-win for the environment, the fishing industry and consumers.

Restaurateurs like Albert Guzmán have embraced the North American invader as a local specialty.

Atlantic blue crab may seem foreign to Mediterranean cuisine, but the chef says it pairs perfectly with other seafood, served either as a main course or in broths, snacks, starters , sauces and paellas.

“We used to use different species that were much more expensive, like lobsters or the spider crab, which is not indigenous – it had to be delivered from Galicia. And now we have the blue crab which has a flavor and a taste similar – then we have a great, premium product at a price suitable for affordable restaurants, which is also a good thing,” says Guzmán.

Not just a Catalan problem

But invasive species are not only present in Catalonia. In Greece, in the Gulf of Elefsina west of Athens, local fisherman Giórgos Grívas regularly harvests non-native bivalve molluscs. Originating in the Indo-Pacific region, they spread to this part of the Mediterranean through the Suez Canal – one of the main routes for non-native marine species in the Mediterranean.

“It is called the pearl oyster, Pinktada imbricata radiata. In addition to food, pearls are sometimes found. It can be eaten raw, baked, steamed or fried, in pasta or risotto”, explains Giórgos.

Fishermen sell the pearl oysters to local fishmongers who then sell them for €5 a kilo – but the trade is limited by a lack of regulation.

Unlike mussels and other popular local molluscs, pearl oysters are considered an exotic species, and Greek law does not cover their exploitation for human consumption.

John Theodorou, associate professor at the University of Patras, is working to change that. His to research Calls for the legalization of pearl oyster fishing in Greece so that they can be fished sustainably and sold at higher added value.

“This is very important as it provides an alternative for fishermen to improve their income as pressure on natural stocks of other shellfish increases due to overfishing and climate change,” he explains.

Researchers from the University of Patras have concluded that pearl oysters do not harm endemic species and can be fished sustainably.

They have developed new rules and standards for the entire value chain – from fishing specifications to best storage and transport practices.

Recipes with pearl oysters are already studied in cooking schools in Greece.

Eleni Liakea, professor of tourism and hospitality, told Euronews: “People really like this meal! I would even call pearl oysters a superfood, they are high in protein with minimal carbs and fats, and they have great flavor and taste delicious. .”

Legalization could also be good for aquaculture. In Sagiada, near the Albanian border in western Greece, Spyros and his father cultivate seashells on submerged ropes.

The only invasive species that cause them problems are the translucent sea squirts that have to be constantly cleaned from the ropes. But farmers don’t care about pearl oysters, which are sometimes found among their main crop.

They say it could be another product for sale if the regulatory framework accounted for this non-native species.

“We can’t grow them legally, or sell them, so we basically harvest them for our own consumption, whenever we have parties or whenever special people come,” said Spyros Stasinos, from Stasinos mussel and oyster farm

The aquaculture sector is developing rapidly in this part of Greece. Mussels and oysters help keep the water clean of excess nutrients. They are also an excellent source of healthy food, so farming pearl oysters could be a harmonious solution.

“It’s growing fast, it tastes good, the markets are there. So I think it’s a matter of time to commercialize this new resource. We can’t eradicate this species. We have to co-evolve with them as society and as a production sector”. “, explains Costas Perdikaris, the head of the Epirus Regional Fisheries Department.

The invasion of hundreds of non-native species in the Mediterranean Sea over the past decades is a major challenge, but also an opportunity for the fishing sector to adapt and make the most of it.

On the occasion of “International Day of Mount Everest” (May 29), “The Art Maze”, by curator Marcus Schaefer, unveils the latest masterpiece by artist Sacha Jafri as a first-ever event at the Mount Everest