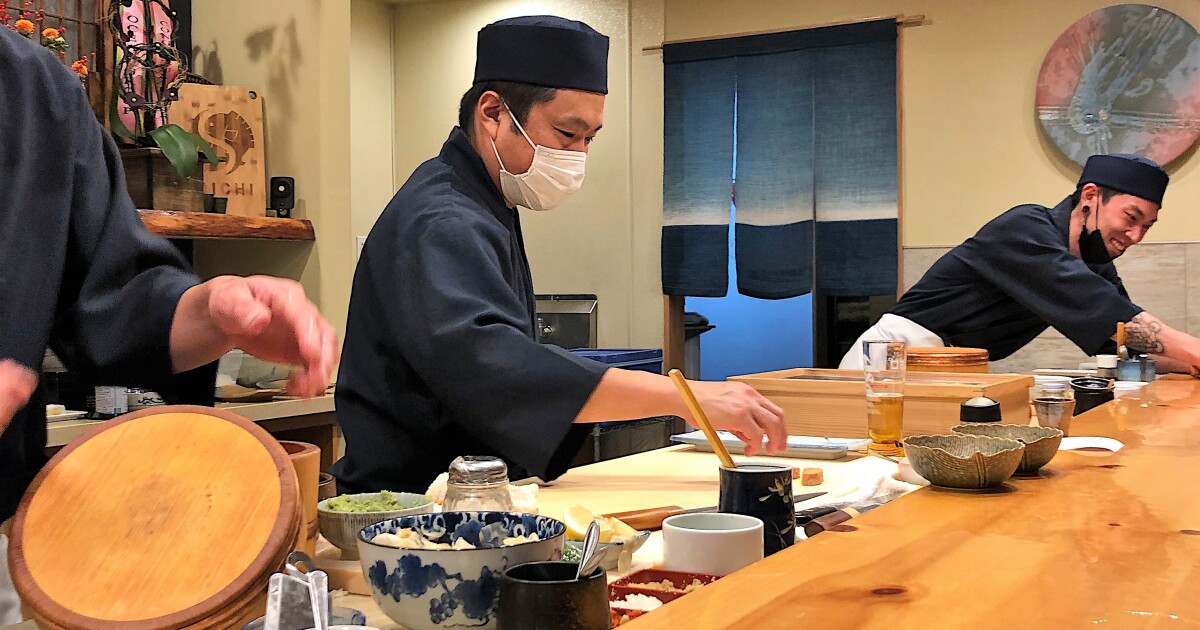 For local chefs at Michelin two stars Addison and Michelin one star Jeune et Jolie and Sushi Tadokoro, the coveted awards marked the peak of their culinary careers. But for chef Soichi Kadoya – who opened Soichi Sushi with his wife, Raechel Kadoya just two years ago at University Heights – receiving a star has been an unexpected and stressful experience. Kadoya feared that an explosion of new business could alter the intimate, friendly and very social dining experience he and his wife cultivated at their 26-seat restaurant.

Fortunately, his worries were of no avail. Raechel, who handles business and reservations, said all that has changed in Soichi is the length of its waiting list, which has grown from two to three months since the award was announced. For diners who sign up to fill last minute table cancellations, that list has grown to 230 names. But as always, the Kadoyas still keep four seats at the 10-seat sushi counter available every night for their loyal devotees. They also didn’t feel the urge to decorate the restaurant with a Michelin star trophy or window sticker.

Although Soichi Sushi is a traditional Japanese omakase (chef’s choice) restaurant, it is unlike most others, with its warmth, cheerfulness, and chatty team of chefs. Kadoya was a bartender and musician before he became a sushi chef, and the acoustic guitar hanging on the back wall is not for the show. He is known to serenade his customers, who frequently buy drink tours for the cheerful chefs. Each dish is served with a smile and an explanation of where the fish was caught and how it was prepared. Laughter is the background music of the restaurant.

Kadoya grew up in Yokosuka, Japan, where as a child he caught black snapper – the chubby fish seen on the Soichi logo – and sold it to restaurants that serve the nearby U.S. Navy base. At 16, he got his first job at a local sushi restaurant, where he was a bartender a few years later when he met his wife, the Chula Vista-born daughter of a stationed US Navy officer. in Yokosuka. They married and moved to San Diego in 1999, where he got a job as an apprentice sushi chef with Ichiban Sushi in Hillcrest, and later Surfside Sushi in Pacific Beach. There he worked alongside another apprentice and future close friend, Takeaki Tadokoro.

In 2004, the Kadoya returned to Japan and were there in 2011 when a devastating earthquake and tsunami caused the nuclear disaster in Fukushima Daiichi, just 150 miles from their home. Worried about how the write-offs could affect their three daughters, Raechel returned to San Diego with the children in 2012, while her husband stayed on to sort out the family’s property and financial issues.

In 2013, Tadokoro decided to open his own restaurant and flew to Japan to ask Kadoya to come and work for him. Kadoya will spend six years at Sushi Tadokoro before he and Raechel open Soichi Sushi. The two remained as close as brothers and they happily celebrated their Michelin star.

The Fukushima experiment made the Kadoyas ocean ecologists. They are vigilant as to where they buy their Japanese seafood, selecting only fish caught in northern waters, away from the tidal currents around the old nuclear power plant. They also buy in markets that sell fish mainly caught with rods by fishermen in small Japanese villages and they waste no part of the fish they buy.

Kadoya is a purist in the way he prepares and serves his fish in the traditional Japanese style. He makes his own marinades and sauces and has a unique sushi rice technique. There are no American style sushi rolls. Diners can order Ã  la carte or choose from two fixed-price menus. The generously portioned $ 95 omakase nigiri menu includes a plate of four appetizers, 12 pieces of nigiri sushi, a bowl of shirumono (fish soup), and a scoop of toasted sesame or homemade green tea ice cream. The comprehensive $ 135 omakase menu features eight expertly prepared dishes with raw and cooked dishes.

Highlights of the nigiri menu on a recent visit included monkfish with a sweet dressing salad, the delicate Emperor of Japan’s tofu, red snapper with homemade yuzu and Himalayan rock salt shavings; triggerfish topped with a soft mousse of triggerfish liver; a generous portion of Hokkaido brackish sea urchin and a luxuriously creamy bite of toro (fatty tuna belly).

Soichi Sushi doesn’t have the sleek, minimalist look or church environment of many upscale sushi restaurants, but it is equally the highlight of a chef’s life experience in the kitchen. than all the other new Michelin starred restaurants in California.