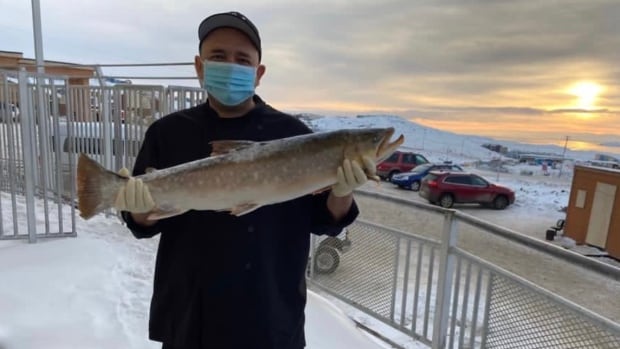 This includes working with local hunters and anglers to offer dishes like caribou and arctic char.

Burafah has been highlighted in the Globe and Mail as one of the country’s next starred chefs. He identified a chief in each province and territory.

Burafah, who grew up in Brazil, learned to cook early in her Italian and Lebanese family.

Although cooking has always been a passion, he first worked as a lawyer before moving to Canada to fulfill his dream of working in the kitchen. He went to culinary school and worked in restaurants in Montreal, before taking a job as a sous chef in Iqaluit in 2017.

It was here that he learned the importance of country foods, most notably in 2018, when a local hunter showed him how to clean a caribou.

“I will never forget this experience,” he said.

Some of the partnerships Burafah has engaged in include Project Nunavut, an organization that aims to support projects that improve the traditional economy.

He said it involved him in From lake to platewhere he buys local fish like Arctic char.

Burafah has also partnered with Traditional Nunavut cuisinea butcher shop that sells local products such as muktaaq, caribou and seal.

He said one of the benefits of these programs is the low environmental impact resulting from supporting small-scale harvesting.

For the Northwest Territories, The Globe and Mail credited local Yellowknife resident and head of the Sundog Trading Post, Calvin Rossouw.

Rossouw, 27, said he was excited about the news.

“I read this diary growing up,” he said. “And to know that my face was in it was amazing.”

The article featured each chef’s favorite dish, which for Rossouw was ButterBirch Caramel ice cream.

“It’s like a play on a maple pecan, which is pretty standard ice cream, but we made it local and northern,” he said.

Rossouw has worked in the kitchen since the age of 14, starting at the Black Knight as a dishwasher.

He said he recognized the teamwork involved in running a successful kitchen – a lesson he took with him to each of his future jobs.

“It was watching the guys work during the lunch rush,” he said. “It was amazing to see them work together.”

He said he was proud to be recognized, but also proud of what Sundog Trading Post has achieved during its short period of operation, which officially opened in 2021.

But he added that there was more to come.

“We’re only scratching the surface of what we can do here,” he said.

“Especially with our ice cream, we’re really working towards the wholesale product, going into the grocery store and other restaurants.”

Rossouw said there are also plans to extend the opening hours for operations in the evening.

In the Yukon, The Globe and Mail paid tribute to Klayton McColl of Whitehorse, crediting him for incorporating fish, wild game and seasonal berries into various dishes.

Now available to take away thanks to La Belle Aurore