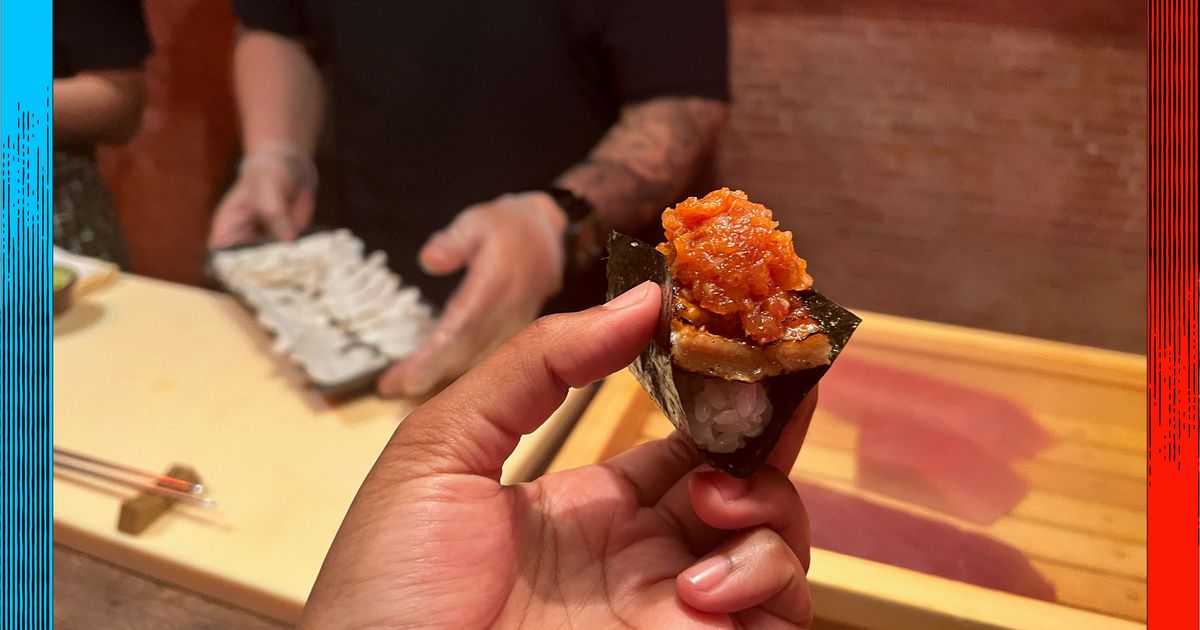 This article originally appeared in The year I ate in New York, a newsletter about eating across the city, one restaurant at a time. register here.

The last meal I ate before officially becoming a diner in general was a three-hour Edomae sushi service at a fancy sushi bar that, at the time, was about to open. About 30 dishes appeared throughout the meal (grilled eel, several uni concoctions, Hokkaido scallops that were scaled right in front of me), and although I can’t remember everything I ate, I remember loving it. This night was the definition of a gastronomic event, the most beautiful expression of gastronomy. It would also have cost well over $1000 for two people, which is an absurd price to pay for dinner.

Even if you have money to spend, I didn’t. the meal was a free pre-opening preview for food writers – you really have to be in the mood for a multi-hour meal. In every sense of the word, that can be a lot.

So I looked for simpler, more egalitarian sushi options, even though in New York the types of places we talk about are either the sky-high priced rooms with super-exclusive seating or affordable neighborhood places that can certainly good on their own terms, but which tend to favor the same familiar dishes and preparations.

We don’t suffer from a shortage of sushi; it’s just that a lot of it can lack identity beyond “spicy” or “crispy” which is fine most of the time, but tends to be more about what’s going on the roll than the quality or variety of the fish itself.

Sushi on Me is one big party.
Photo: Tammie Teclemariam

However, the places I’ve been gravitating to lately fall somewhere in between: mid-priced places that may not be as plentiful and certainly aren’t “cheap”, but still offer that which I began to see as a compelling value. . These omakase meals are primarily a range of nigiri, although they may also include sashimi and a hand roll or two. They offer similar quality and variety of fish to higher end restaurants, albeit in a more casual environment, with a less intensive menu at a fixed price below $100. They typically cut costs by operating in bare-bones spaces or offering fixed seating that helps manage the flow of customers more efficiently.

For $55, you can, for example, head to Sushi Katsuei and finding a perfectly serviceable meal, though I found the chef’s chosen selections of three pieces of nigiri at a time a bit uninviting. I preferred my $62 meal to Sushi W on the Upper West Side, which I first heard about on TikTok, and where the crowd was a mix of Gen Z couples who were carefree enough to let their sushi linger after the chef had it posed, as well as neighborhood baby boomers eating sea urchins for the first time. My highlight was when the chef put ikura straight into a piece of seaweed in my hand so I didn’t have much to complain about.

I felt the same while eating the $68 omakase at Matsunori on the Lower East Side, a BYOB counter where you reserve a seat for a one-hour reservation. Our place at 8:15 was completely sold out, which is common, and explains why these small counters can afford to buy fish of such high quality, although I had some initial doubts after my first course, a confusing appetizer of hamachi sprinkled with real Frosted Flakes. The next hour consisted of a steady succession of delicately garnished nigiri pieces, one with pickled mustard seeds, another simply with flaky salt or sesame seeds to bring out the fish. Wagyu was sliced ​​and reheated with a blowtorch, atomizing smoked fat into the air. Fire always leaves a good impression.

Sushi on me.
Photo: Tammie Teclemariam

Even further down this path was sushi on me, a party spot in Jackson Heights where you might see, as I did, the two strangers sitting next to you disappearing into the bathroom together after 50 minutes of unlimited sake service. I loved the party gimmick because the staff brought the necessary energy, and I had a great time – although the sushi wasn’t the most skillfully done and a bit redundant on the crispy chili. For $89 (cash only!), I would stay there again in an instant if someone asked me.

This brings me to my favorite mid-priced omakase place, taikun, also on the Lower East Side. Before going, I hadn’t realized it was some sort of speakeasy, until I found myself outside the supposed venue, 79 Delancey, unable to open the locked doors, wondering if I had been fooled. Finally I asked a hostess at the gray ladyan oyster bar next door, which offered me a free tequila soda while I waited for the previous omakase service to end inside the hidden space.

Taikun may be hard to find, but it’s special inside.
Photo: Tammie Teclemariam

I got the whole story when I sat at the counter next to two couples who, like me, had also booked their reservations hours earlier. The chef and bar manager who run Taikun don’t pay rent on the space, which on weekends reverts to its original purpose: a storage cupboard for one of the Gray Lady’s bars. Through this arrangement, not only can you get a compelling 13-course omakase set for a very reasonable $85, but Chef Feri also gets his Friday and Saturday nights. Sounds like a bargain for everyone involved.

Chef Feri’s omakase favors a flavor he calls “New York-style” sushi, which he explained to me as “mild, easy to eat, no fish.” (Think: sea bream in olive oil, flaky salt kinmedai.) His goal, he told me, is to make everyone happy. “New Yorkers don’t like fish, but I have some for customers who do,” he said. “Clam, octopus, squid – you give it to New Yorkers, they’ll never come back. You give it to the Asians, they come back.

To cater for everyone’s taste, Feri offers an a la carte option for anyone who wants it, which I’ve done a lot. While I could appreciate the freshness of the Hokkaido uni that Feri offers, I enjoyed my “fishy” extra of hay-smoked mackerel, Japanese sardine, and eel even more.

The year I ate in New York

By submitting your email, you agree to our terms and Privacy Notice and to receive e-mail correspondence from us.