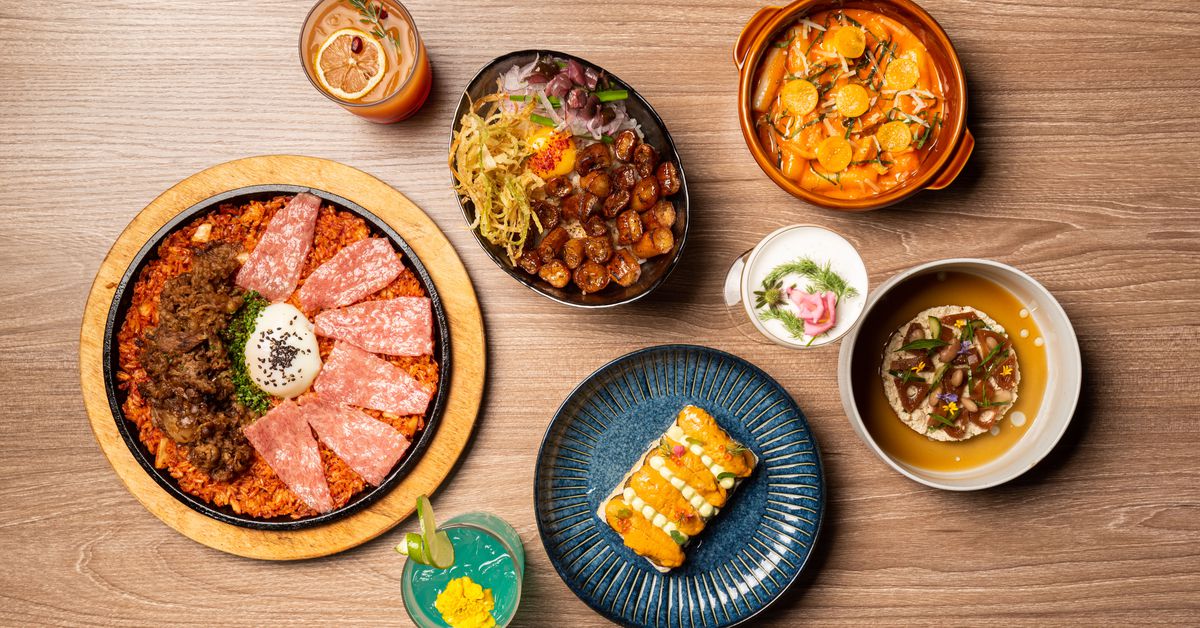 LA’s Koreatown has a new modern Korean restaurant worth checking out called Tokki, which opened a few weeks ago in mid-October in the busy Chapman Plaza complex on the corner of Sixth and Alexandria. The restaurant comes from four partners who know their respective jobs as white collar workers (Alex Park, Yohan Park, Patrick Liu and John Kim), but have no experience in catering. Luckily, they have Chef Sunny Jang, who has worked extensively at places like three-Michelin-starred Quince and the modern Korean restaurant Barnzu in San Francisco, as well as The 50 best restaurants in the world Atomix in New York, at monitor the menu and runs the kitchen. Together, the five hope to establish the first true modern full-service Korean dining-focused restaurant in Los Angeles that epitomizes custom Korean dishes using American ingredients and fine preparations.

This means sharing your choice of plates and larger dishes like starters that offer slightly larger portions. Jang will want you to start off with crumbled tofu with crunchy lotus root, epitÃ©es, and a hint of spice from habenero oil. Uni toast gets a Santa Barbara or Hokkaido variation of shellfish roe, depending on what’s available, on a thick slice of bread, smoked trout roe, and pickled Korean cucumbers. The truffle kimchi fried rice should be cloying, but Jang’s skillful touch of heady tuber oil gets a glorious crispy bottom on a cast iron skillet, tender bulgogi, and even an option of thin A5 wagyu Miyazaki slices. like paper. This is quintessential food, and the limits of beer and wine are not the case for Tokki, who makes colorful soju cocktails that are as fun and complex as a place with full booze. . The dimly lit ambiance has hints of Danish minimalism while the faux greenery gives the relatively austere space a bit of colorful pop.

Tokki, which means rabbit in Korean, but should not be confused with the artisanal soju maker of The same name, is part of a new wave of modern Korean restaurants opening up in Los Angeles. The trend of non-traditional Korean flavors and dishes often served in more fancy or button-up establishments began in Los Angeles with the influence of chef Kogi Roy Choi, whose flagship restaurant Pot closed too early inside the Line Hotel. (Choi took much of what he does in Pot and moved it to Best friend in Las Vegas).

The phenomenon of modern Korean comes from trained American chefs, often second generation or young first generation chefs, who want to use the flavors they grew up with at home and in traditional restaurants, and remake them for a wider audience. or who might be willing to pay for more premium ingredients. Since Pot, places like Baroo, Hanchic, Spoon by H, Majordomo and Perilla LA, HanEuem, as well as the soon-to-be-opened Kinn, have marked the sense of LA’s place in the canon of modern Korean cuisine, a subgenre that has origins in Seoul and New York. Over the past decade and more, restaurants from Momofuku Ssam Bar in New York to Parachute in Chicago to Maum in Palo Alto have demonstrated the enduring popularity of Korean cuisine outside the confines of typical jjigae, bibimbap, and gogigui ( barbecue).

Back at Tokki in Los Angeles, Jang says the idea was to do something relevant, and ultimately what people want. â€œOur food is affordable with a good portion. It’s not quite Korean food, with a lot of French, Japanese and Asian cooking techniques. We distort it a bit from the original, â€she says. Originally taken to consult on the menu but now established as Tokki’s opening chef, Jang’s food has a smart and elegant touch that should resonate with young K-Town diners, many of whom are used to the tradition, mom and pop – stylish restaurants like Kobawoo, Soban, and Park’s BBQ.

Jang’s fantastic dae-chang dish comes in the form of slightly chewy and slightly sweet beef intestines on rice and joined by runny egg yolk. Mala Lemongrass Pork Noodle Soup has neck bones and potatoes that blend Sichuan and Thai ingredients with classic Korean hangover soup. The hot and sweet fried chicken is paired with fried rice cakes, puffy shishito peppers, and cheddar cheese for something that works as well as a movie or a ball game snack (sorry, no TV here). For dessert, there’s an ever-illusory hotteok, fried and served with cinnamon, vanilla ice cream, and the tangy acai powder pop. It’s not Korean food you grew up with, but it will all feel familiar, satisfying, and inventive.

Hours are open from Tuesday to Saturday, with a service from 6 p.m. to 10 p.m. and until midnight on Friday and Saturday. Reservations available on Resy, with $ 8 parking behind the restaurant.