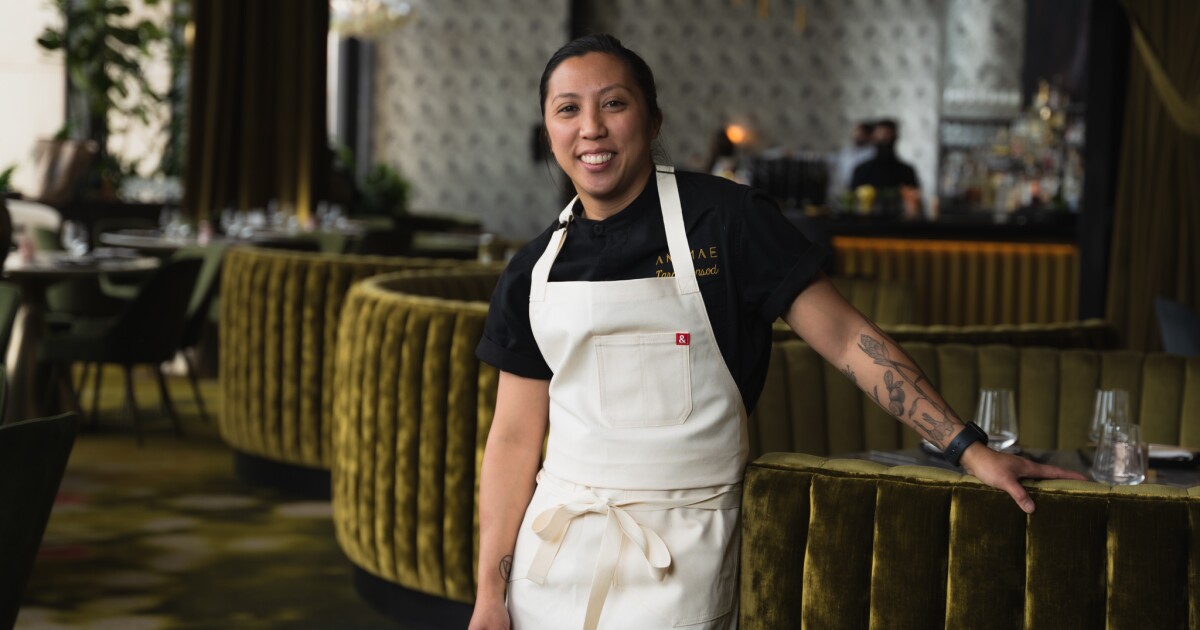 At Animae, Chef Tara Monsod is in the house and leaves a tasteful imprint on San Diego cuisine

The problem with Animae is that this is the kind of restaurant that has high expectations due to the buzz generated on social media and elsewhere.

When Animae launched in 2019, under the culinary direction of pasta giant Joe Magnanelli, it did so with great fanfare, mainly because the Asian-inspired restaurant was coming out of the House of Malarkey – that would be Brian Malarkey from the fame of “Top Chef”. which gave birth to Herb & Wood and, before that, to the fabric-inspired establishments Searsucker, Herringbone, Gabardine, Burlap and Gingham.

This story is for subscribers

We offer subscribers exclusive access to our best journalism.
Thank you for your support.

The chic 7,600-square-foot Animae, a Malarkey project with longtime business partner Christopher Puffer, had high expectations and an even higher price tag of $ 5.5 million. And it shows, from the luxurious curtains and cabanas in olive velvet to the furniture in shiny gold. The grand bet was crowned with success, earning rave reviews, especially from one of the newspaper’s editors, who hailed Animae’s bold menu as “a real sensation.”

I missed the Magnanelli era of Animae. It left in 2020, just a few months after its grand opening. By that time, Animae, along with the rest of the restaurant industry, had been shut down by the COVID-19 pandemic. When restaurants started to reopen in the fall of 2020, Animae had a new chef: James Beard Award winner Nate Appleman, who overhauled the menu to reflect what he called “California cuisine with a twist of cuisine.” ‘South East Asia “.

This time I was not going to miss it. So, in the midst of a pandemic, we went to Animae with hand sanitizers in our pockets and face masks. That evening – a perfectly chilly fall evening in San Diego – four of us ate in Animae’s 60-seat fully outdoor dining area on the patio in the garden of the Pacific Gate by Bosa condominium tower. .

Appleman’s menu was, by design, simpler and more straightforward. From what we ate the third night after it reopened, the flavors were bold. Unfortunately, a few days later, the pandemic brought everything to a halt again. And shortly after, we learned that Appleman was gone.

A year later, the doors of Animae are open again, this time with chef Tara Monsod at the helm. Again, no more buzz. In September, the restaurant was honored by the Michelin Guide with a Michelin Plate Award – a designation for restaurants that serve “very good food”, making them eligible for higher honors. But the buzz is mostly centered on Monsod, who has revamped the menu to reflect more traditional dishes, pulling from, as the restaurant’s website claims, “every corner of the Far East.”

On the menu, some Filipino dishes, presented as part of the fall menu. It worried me. Why? I’ve seen Filipino dishes on menus outside of mom-and-pop stores in Mira Mesa, National City, and Chula Vista. I’ve seen them at Tidal in Mission Bay, at Jsix in downtown San Diego, and at Bivouac Ciderworks in North Park. Either it works or it doesn’t, and unfortunately the current menus at Tidal and Bivouac don’t have a single Filipino-inspired dish, and Jsix is â€‹â€‹temporarily closed.

Monsod – who grew up in a traditional Filipino household in the Los Angeles suburbs – put decidedly Filipino dishes right in the middle of Animae’s menu. â€œUnapologeticâ€ is how she describes the Filipino dishes that come out of her kitchen, most of which is a tribute to her heritage and a nod to the food she grew up with. And that gets everyone talking about Anima again.

Weeks before I finally sat down to taste Monsod’s food on my own, I really tried not to be swayed by the buzz – so much so that I often quickly scrolled through messages on my phone that might have something to do with Animae.

Is it really that good, or is it all the hype?

Monsod is not a shy leader. She is not afraid of flavors, whether Chinese, Japanese or Filipino. But it is not overdone either. There is a certain level of sophistication and restraint in his dishes – just enough salt here, enough heat there, perfect smoke here.

Under Monsod, Animae’s new menu is, to borrow from a colleague, a daring sensation.

On a recent Saturday night, just days after she unveiled a new seasonal menu, I visited Animae. I tried to stay away from some of the menu stalwarts like the A5 Japanese wagyu steak, and instead turned to dishes that I thought might give me a taste of the Monsod twist. We tried many dishes including the caviar shrimp toast ($ 27), a baked dish with trout roe, spicy aioli, and nori furikake (a salty-nutty seasoning). It’s the dish Monsod perfected in his apartment during the end of the pandemic and which has since garnered the lion’s share of the buzz, and for good reason: it’s delicious.

Apart from the shrimp toast, here are six flagship products from Maison Monsod:

New on the menu this fall, Taiwanese chicken. Think of it as a cousin of the popcorn chicken. This one is slightly bigger, tender and flavorful, with just a hint of Szechuan pepper and set on a bed of honey and topped with Thai basil. It is served with Thai basil aioli, which gives the dish a richer flavor. But honestly, I liked the chicken on its own. ($ 16)

Ginataang mussels – coconut cream and tahong in Tagalog – are the Filipino version of mussels and chips, minus the fries. Inspired by the mussel dish Monsod used to eat as a child in the San Fernando Valley, the star of this main course is the succulent mussels from Salt Springs of British Columbia. But up there, the creamy coconut milk broth is headlining. There’s a hint of heat in the broth, just enough to create a playful balance with the sweetness of kabocha squash. Green sea beans add an added bonus of freshness. ($ 28)

This hot appetizer-sized dish is straight out of the Filipino playbook: fried pork belly. Cooked just below its traditional ultra-crispy state, the pork was actually just right: chewy and tender with just enough crunch on the skin. Served with figs and shiso (a Southeast Asian herb from the mint family), the pork rests on a bed of sarsa apple pate (or sauce) very similar to the traditional liver-based sauce. of pork that accompanied all lechon kawali dishes I have had in the past. Monsod’s sophisticated restraint shows up here – with all the flavors blending together perfectly. No more no less. ($ 17)

One of Monsod’s most popular dishes is nothing new this season – it first appeared on the Animae menu when Monsod was sous chef under Appleman. Kare kare is a popular Filipino stew traditionally made with oxtail simmered in a thick and creamy peanut sauce. At Animae, the short rib replaces the oxtail, and it does so successfully. The short rib is melt-in-the-mouth, served in a rich peanut sauce with long beans and roasted eggplant. Kare kare is normally served with a spoonful of bagoong, a tangy and salty condiment made from fermented fish or shrimp paste. Here we don’t get the spoonful of bagoong. Instead, we get a hint of flavor in the form of bagoong peanut oil – enough to satisfy kare kare purists but not too strong to scare newbies off. If your server offers you rice, which is traditionally served with kare kare, say yes. Here that means a bowl of fragrant and flavorful garlic rice – again a Filipino staple. ($ 44)

I didn’t originally order this but our server Drew said the side dish was one of the best he has ever had. Cabbage? Drew didn’t lead us off the wrong path. That dish – boring Napa cabbage – came out of the kitchen like it had seen better days. But it turned out that was the key to its success: it was roasted to perfection, with just the right amount of spice and bursting with umami flavor, thanks to the hazelnut butter miso and charred lime. The boring cabbage, to my surprise, turned out to be the star of the night. ($ 15)

If it were up to me, all meals would start with dessert. In that case, saving the dessert for last was definitely worth the wait. We ordered two. The first was the Coconut Cashew Napoleon, a puff pastry served with cashews, coconut, and yuzu sorbet ($ 14). It was a playful dessert with fun flavors, from roasted cashews to fresh sorbet and citrus, with just a hint of coconut. But the second dessert – Pandan Malasadas ($ 14) – was the perfect way to end a perfect evening. Malasadas, sometimes referred to as Portuguese fried dough, were fried to perfection – pouches of soft dough, in this case, served on a bed of lemon custard and filled with pandan-flavored custard, a fragrant tropical plant used in many Southeast Asian and South Asian cuisines. The fresh flavors of the panda cream paired quite well with the lemon curd – exquisite, as did the rest of the evening.