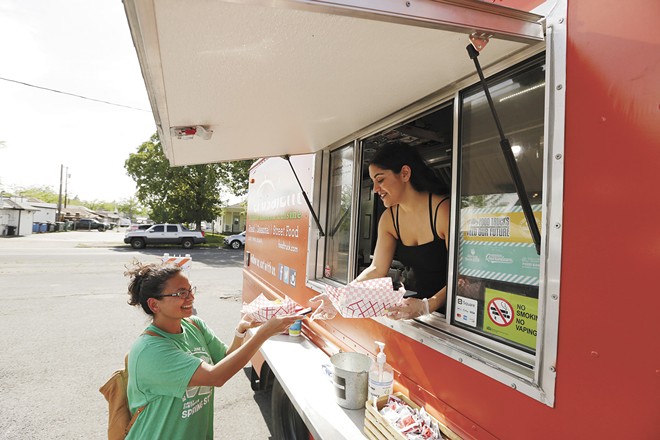 From Middle Eastern and Cuban cuisine to pizza and beer, the region’s newest food trucks have it | Food News | Spokane | Interior of the Pacific Northwest

The best-selling falafel sandwich in Middle Eastern cuisine in Jerusalem.

By their very nature, it can be difficult to keep up with the growing number of local food trucks, trailers and pop-up vendors constantly rotating between community events, farmers’ markets and other venues in the area. And if it seems like there’s always someone new coming to the food truck scene, it’s because there are, including the next five that launched last year, plus a new fixed place where these mini-restaurants on wheels can set up shop regularly.

The recipes for each dish delivered through the window of Majda Ritchie’s bright orange food truck were passed down from her mother, all for favorite dishes often enjoyed as a child in Jerusalem, Israel. Ritchie, with the support of her husband, Dan (whose family owns Mary Lou’s bottle of milk and ice cream), started Jerusalem’s Middle Eastern cuisine last fall, and all summer can be found Tuesday evenings at the New Garland Summer Market, as well as every other Wednesday at Kendall Yards Night Market. The truck’s concise menu showcases the best of Middle Eastern flavors and dishes from the Jerusalem area, including Ritchie’s Chicken Shawarma Wraps ($ 12) and Beef Kofta, Seasoned with Onions, Parsley. and spices and served as a slider ($ 12).

â€œSo far people love our shawarma,â€ she says. “It’s not like gyros, we don’t have tzatziki in Bethlehem. And falafels too, people love it. A lot of people tell me it’s different even though there are a lot of falafels in Spokane. . ” (CHEY SCOTT)

Thursday was the slowest day at Mama Tiaz, but not anymore, says founder Talitha “Tia” Tarpley. Today Thursday is the start of specialty pizzas, like the ever popular Big Dill with bacon, sliced â€‹â€‹dill pickles, red onion, mozzarella cheese and a homemade ranch on the Tarpley Neapolitan style crust. It’s a dough recipe that has lasted for seven years, says Tarpley, whose experience includes 16 years as the franchise owner of Coeur d’Alene Jamba juice. Tarpley opened the truck last spring – it was delayed a few months due to COVID – and is currently parked at the Prairie Pavilion Food Truck Park (7777 N. Heartland Drive, Hayden), although it is already considering d ” to open a brick-pizzeria and mortar one day. In the meantime, diners draw from its assortment of aptly named pies: the Spicy Porker with bacon, ham, pineapple and jalapeÃ±o; the Supreme Bender with sausage, pepperoni, peppers and black olives; or the most popular, its Pie topped with Pepperoni, Salami, and Sausage (all 9-inch pies cost $ 12). In cooler weather, look for an expanded menu of starters, like lasagna and, of course, other specialty pies. (CARRIE A. SCOZZARO)

A passion for sharing family recipes passed down from generation to generation is also part of what inspired Jose Sosa to launch The Cuban Way this spring, after waiting for the pandemic in 2020. Sosa hopes to bring joy to the community through it. his food, and giving back through his business. The best-selling item on the truck to date is the El Jefe Cubano sandwich ($ 14.50), but Sosa says he has around 200 recipes he plans to add and remove from the menu. His popular sandwich is made on Cuban-style bread, which is similar to French bread but softer and more chewy, Sosa says, and stacked with pork slowly roasted for 16 hours, Swiss cheese, ham, pickles and yellow mustard.

â€œWhen you mix these flavors, it’s just a flavor bomb exploding in your mouth,â€ says Sosa.

While many customers return again and again for the Cubano, Sosa encourages diners to sample the truck’s entire menu, which includes Cuban-style roast pork, chicken and beef ($ 15 to $ 16), as well as a traditional bread pudding ($ 4) and a flan ($ 5) for dessert. The Cuban Way revolves mainly around local breweries during the lunch hour, and weekly schedules are always shared on Facebook.

â€œI want to bring Spokane the flavors that Spokane has long been missing,â€ Sosa said. “People always say ‘Your food is so delicious’ and I appreciate that.” (CS)

If there have been any benefits to the food and beverage industry during COVID, that must include the inventive new ways that vendors can now sell, serve and even deliver alcohol. Parked among a plethora of other food trucks at the popular Prairie Pavilion food court in Coeur d’Alene, NorthwestTaps offers an assortment of adult beverages to eat in or take out. Canned drinks include classics like Kokanee and Modelo, while draft beer alternates with regional options like Elysian’s Space Dust IPA or beers from Coeur d’Alene’s Trails End brewery. The pop-up bar also serves wine, canned cocktails, and non-alcoholic drinks, along with entrees like wings ($ 9.50) or German sausage ($ 4.25). On Wednesdays, get a dog or a sausage and a beer for just $ 8. (CASE)

After several seasons at Sandpoint serving her grandmother-inspired Greek cuisine at events such as the annual Sandpoint Festival, Adia Burton has finally gone mobile with her Opa food truck. Most of the time you can find her near Misty Mountain Furniture (502 Cedar St.), but she’s also a staple at MickDuff’s Beer Hall (220 Cedar St.) and recently helped christen the new Sand Bar (formerly Roxy’s). , at 215 Pine St.). Feast on a lamb and corned beef gyro with hummus and all toppings ($ 12), which in Aegean style means lettuce, tomato, cucumber, red onion, kalamata olives, tangy Feta cheese, and the delicious sauce. creamy garlic sauce known as tzatziki. Try crispy fried falafels (ground chickpeas) wrapped in pita bread ($ 12) or just go for dessert with baklava ($ 5). Burton makes his own with nuts (rather than pistachio) and just a touch of cinnamon. (CASE)

The all-new Hillyard Food Truck Pavilion offers space for up to five mobile vendors to operate simultaneously in a spacious lot along Market Street in historic Hillyard, adjacent to the Hillyard Heritage Museum. Owned and operated by Kailey Valley and Kyle â€œChef Freakâ€ Bowlby, the lodge debuted this spring and hosts a handful of rotating trucks during the week.

Friday evenings, however, are a highlight of the week when the park holds its market and open mic night from 5 to 9 p.m. with several revolving vendors on site, a chance for local musicians to perform live, lawn games and other activities for all ages. Amenities for diners include a covered seating area, portable bathrooms, and hand washing stations. Food trucks are supplied with electricity and water.

â€œWe want to bring the Hillyard neighborhood back to life,â€ says VallÃ©e.

Bowlby adds, “I want this to be a destination hub. I’m from Coeur d’Alene and I see the markets there getting huge, like the Prairie Pavilion, and I want that here in town.” (CS)