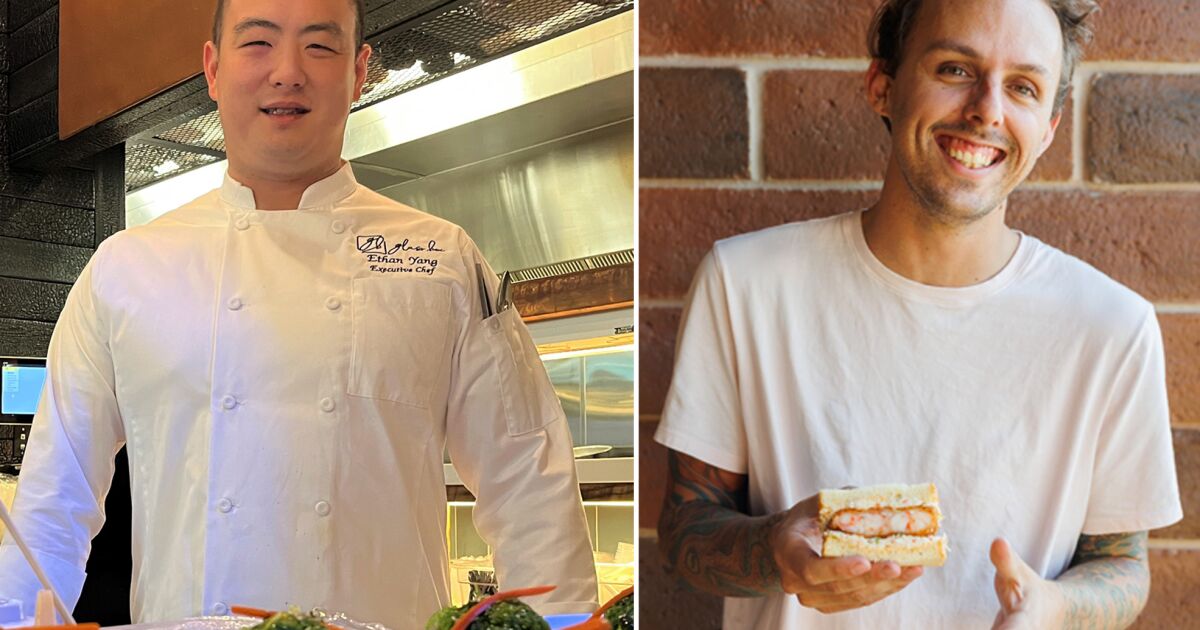 Ethan Yang and William Eick have a lot in common. Both North County men are in their early thirties. They have both spent most of the last decade cooking in the kitchens of restaurants in the North County area. And over the past year, they’ve both launched exclusive restaurants that combine their passion for Japanese cuisine with local ingredients and culinary influences.

Yang runs Glass Box, an Asian coastal cuisine and sushi restaurant that opened Jan. 21 in the Sky Deck restaurant collective in downtown Del Mar Highlands in Del Mar Heights. Eick has opened two Japanese restaurants in South Oceanside: Matsu, a fine-dining restaurant with a tasting-only menu, and Naegi, a casual eatery serving Japanese-inspired sandwiches and salads. Matsu recently celebrated its one year anniversary and Naegi transitioned from a food truck to a brick and mortar location a few weeks ago.

Here’s a taste of Glass Box and Naegi and the chefs behind them.

Ethan Yang’s family moved from Japan to the United States in 1986 and he was born two years later. From the age of 6, he washed dishes in his family’s restaurants and learned to cook alongside his father, Henry Yang, who owned Mr. Charlie’s Fortune Cookie, which closed in 2009 after 20 years in Rancho. Bernardo, and more recently Zen Modern Asian Bistro in Saber Springs. He then served as Restaurant Manager at the Pechanga Resort Casino in Temecula.

A few years ago, Yang decided to go it alone with a bold concept he called Glass Box. As a longtime sushi chef, he was used to customers watching him make rolls and nigiri from behind the glass boxes of a sushi counter. So when he decided to start his own restaurant last year, he created an oversized glass-walled sushi restaurant with 18 seats around the counter and tables with another 35 seats outside the box. glass.

Glass Box serves Japanese, Chinese, Taiwanese, Thai and other Asian-inspired dishes, as well as Yang’s own style of sushi, which is clean, fresh and simple, with a vibrant blend of sweet, sour and sour flavors. umami, but never too salty. Besides raw seafood dishes, there are also hot dishes like Taiwanese beef noodle soup; lamb chop with crispy rice; pan-fried salmon with asparagus and Singapore chili sauce; soft-shell crab salad with fried avocado and garlic chips; and green tea tiramisu.

What to order: All of Yang’s food is fresh, tender, flavorful and carefully prepared, but several dishes stood out during a recent omakase meal.

A serving of dab belly nigiri on rice with a small cube of fresh watermelon, a crisp accent of dehydrated daikon and a sprinkle of togaroshi seasoning was the perfect mix of sweet, tender, crunchy and juicy surprise.

The seasonal yellow squash soup with cooked crab is so flavorful and rich that I could eat just that for dinner. The madai nigiri, a bite of red snapper simply dressed in lemony ponzu sauce and grated scallions is the epitome of Yang’s minimalist, citrus-forward style that uses minimal elements to accentuate, rather than overwhelm, the flavor of the fish. The salmon nigiri is topped with a dab of garlic paste, which surprisingly tickles the back of your throat as you swallow the whole bite at once.

The meaty scallop nigiri is served with the shellfish cut in a V-shape and wrapped around black truffle infused rice and topped with smoked truffle sauce and salt. The albacore nigiri, served with ponzu sauce and garlic paste is so juicy that it explodes in flavor, like a dim sum. And if available, ask for a kumamoto oyster, which Yang serves raw in its shell with delicious accents of tamarind chili sauce, mango chutney and lemon ice cream.

William Eick’s passion for Japanese cuisine dates back to his childhood, when he grew up in a predominantly Asian neighborhood of San Jose. With both parents often away – his father was a disc jockey and sports presenter and his mother went to college later in life to study child development – ​​Eick became the default home cook, preparing simple meals for him and his brother. When the family had time to sit down for dinner, it was usually take-out sushi, Vietnamese dishes, or Dungeness crab.

At age 15, his family moved to Carlsbad. He had planned to become an auto mechanic, but while working in a sushi restaurant in college, he fell in love with the restaurant industry and trained behind the counter in classic Japanese techniques. After working at several restaurants in North County, including his own pop-up restaurant 608 on Mission Avenue in Oceanside, Eick launched his fixed-price Matsu concept as a pop-up in 2019. The full-scale restaurant opened its doors in April of last year. .

Meanwhile, Eick launched two other concepts: Hokkaido Bread Co., which makes and sells Japanese milk bread for its restaurants and for wholesale grocery and restaurant customers; and Naegi, a fast and casual Japanese sandwich concept. He got the idea after falling in love with Japanese convenience store sandwiches and milk bread while visiting Japan several years ago. Naegi also started as a pop-up in May last year, then transitioned to a food truck operation last January before moving to a brick-and-mortar location in September.

The star item on Naegi’s menu is the karaage sandwich, a Japanese-style breaded and fried chicken sandwich. Eick’s karaage sandwich starts with five ounces of chicken thigh meat, which has more flavor and moisture than breast meat. He marinates the chicken in shio koji (fermented rice marinade), soy sauce and mirin rice wine, then breads it with potato starch, frys it and seasons it with salt and togarashi seasoning. Oversized karaage patties are served on Hokkaido bread with shredded raw cabbage and a creamy spread made with Japanese kewpie mayo and various seasonings.

What to order: Eick’s juicy, spicy and tender karaage sandwich is the best chicken sando in town. You do not believe me ? Find out which customers line up every day. Many of them are cooks and chefs who come from restaurants all over North County.

But my favorite menu item (and Eick’s too) is the Ebi-Filet-O. Inspired by the Filet-O-Fish sandwich from McDonald’s outlets in Japan, it’s a hearty katsu (fried) shrimp patty with cabbage and homemade Thousand Island dressing on Hokkaido sliced ​​bread. It’s addictive.