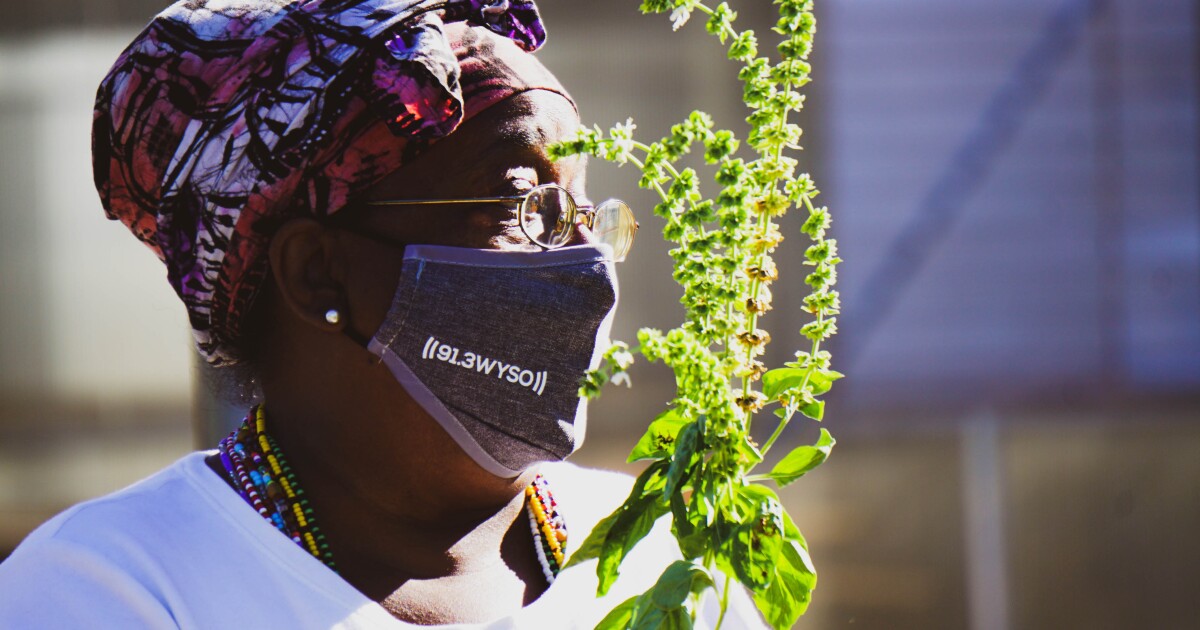 Omopé Carter Daboiku: Reclaiming the agricultural heritage of a community

The Edgemont Solar Garden on Miami Chapel Road has a long history on the West Side of Dayton. Lately it has experienced a sort of regeneration, with partners like Central State University and Agraria in Yellow Springs joining together to support urban agriculture.

Community producer Jaylon Yates previously worked there as a member of AmeriCorps. He spoke to his fellow producer, OmopÃ© Carter Daboiku, affectionately known as Mama O. In addition to being a storyteller and folklorist, Mama O is the manager of the farm. They talked about the food culture and the community at Solar Garden.

Listen to the full conversation

Highlights of the conversation:

On his passion for food culture
First of all, it keeps me in good relations with my people. I grew up with a child whose grandparents knew the food, whose parents grew the food. My dad wasn’t involved in growing food, he was too busy fixing cars, but I remember the chickens in my grandpa Carter’s backyard. And then on Friday night there were chickens in the tub. And then on Sunday morning, there was chicken in the pot with dumplings. And he raised pigs, and that’s how he was able to support his family of 11 growing children. Then it’s just the complacency of being a part of the creation. You know, it’s such an easy way to reinvigorate your own sense of accomplishment, lower your commodity bills in the summer.

And my great aunts, all canned and made with jam and jelly, and soup and put it in their cellars. So even when I was little I had a great understanding and a deep appreciation that I could eat fresh peaches in the middle of winter, you know, nothing like a fresh peach pie on New Years Day. .

On the work of the Edgemont Solar Garden
The first job was to put people back on the board with their hands in the ground. So now we have three rows of cinder blocks here in addition to the incubation farm that Central is sponsoring, and we’ve had five community members growing there, and then all of the board members are helping to help with the crops that are in the area. tight.

My long term goal is to replace us all. Because we are all over 60, the oldest is over 80. So we need to see young people, people 50 and under, come and learn what we know and help keep this heritage alive. We need to have this in our neighborhood to continue teaching people how to grow food, to reclaim our legacy of farming as an art form and a career option. And I would love to work with more young people to help them understand that the way to become a senior is to eat well so that you can thrive.

On the challenges of the Edgemont solar garden
Well the first challenge was that we had all of this land and not enough energy to cultivate it.

When Central State came in and brought in their incubator program, we had over 20 people participating in the program. These individuals had a lot of passion and a lot of enthusiasm, but they were neophytes neophytes.

They had never opened so much land, planned a harvest, worked the land until harvest, and created a distribution plan. It was overwhelming, but it was a great experience as it gave everyone a different appreciation for the kind of discipline and focus it takes to nurture the food and to the point where it has matured and then to recognize. when it is ready to be marketed.

So next year we will be relaunching the program. We have recognized that long term culture is not part of our cultural framework as African Americans reclaiming our cultural heritage on the earth, that we work best when we use the principles of Nguzo Saba that we talk about in Kwanzaa, this collective work and responsibility and cooperative economy and unity, and understanding of our purpose.

West Dayton Stories is produced at the Eichelberger Center for Community Voices and is supported by CityWide Development Corporation.

Reviews | How is the US economy doing?