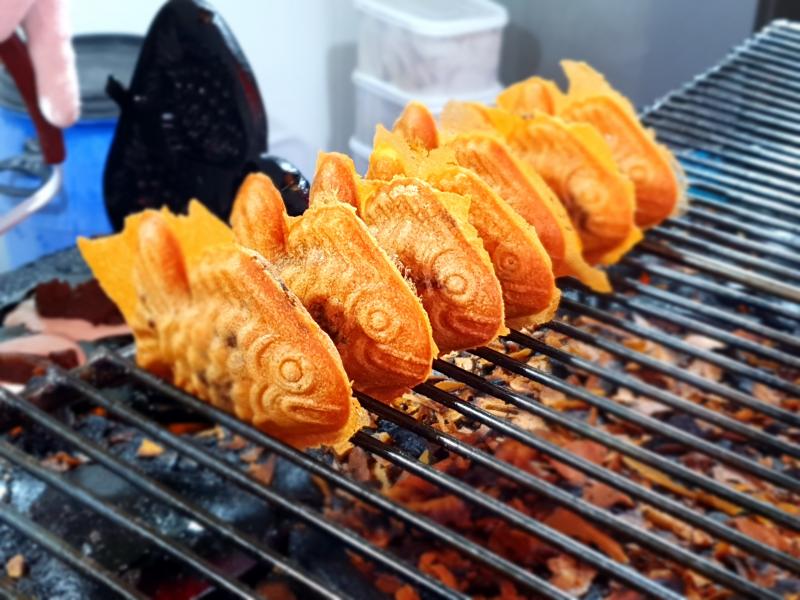 Seven Winter Street Foods You Should Try In Korea

It’s crispy on the outside, chewy on the inside and very addicting. Basically, the lightly sweet red bean paste is stuffed into a flour skin and then baked together. Recently it has evolved into many variations with different ingredients. Creative street vendors fill the cake with sweet potatoes, pastry cream, ice cream, and even chopped kimchi. Personally, nothing beats custard.

Where to buy bungeoppang in Pyeongtaek?

It’s easy to find a cart merchant selling the sweet winter specialty near grocery stores and in traditional markets. If you live near Camp Humphreys, you can enjoy the treat in the humble restaurant which has a yellow wall behind the Hanaro Mart. NAVER Map Pin

Although the carts that offer Bungeoppang don’t have a regular location, you might find a food cart around Sujeong Pharmacy (ìˆ˜ì • ì•½êµ­) in the Anjeong shopping district. My favorite place is Songtan bungeoppang (ì†¡íƒ„ ë¶•ì–´ë¹µ) in the SED (Songtan Entertainment District) near Osan Air Base. NAVER Map Pin

I had never seen or tasted this kind of bread before. It was soft, chewy, and flavorful with a whole egg inside the pancake-like batter. Heavenly Soft Bread not only satisfied my weary soul, but satisfied my hunger. It was really delicious!

Until 2000, egg bread was mainly sold in Seoul and the Gyeonggido area. For me, born and raised in Gyeongsang-do, it was no wonder I had no chance to taste egg bread until then. Thanks to egg bread, I filled my stomach and even got the job! So, for me, this bread is a symbol of luck.

Unfortunately, it’s hard to find carts that bake this bread in my current home, but I’m always on the lookout.

Where to buy egg bread in Pyeongtaek?

Whatever the reason, it sure takes a lot of effort to find a place where chestnut vendors set up stalls to sell their freshly roasted produce. The other day I accidentally noticed an old chestnut vendor spinning a rotating roasting basket on the street just across from the parking lot of the traditional Tongbok market. The alluring smell of the grill reminded me of walking the streets near my old home in Daegu. I couldn’t help myself, so I bought a bag. If you are unfamiliar with the taste of roasted nuts, you might be surprised by the slightly sweet taste and tender texture.

Where to buy gunbam in Pyeongtaek?

A common sight during winter in Korea, the gungoguma, or roasted sweet potato, has a reddish skin and a golden interior. This nutritious winter food is slowly roasted in a large barrel of oil on a low heat until the center becomes tender inside. While they were typically sold by street vendors in the past, the sweet winter specialty can also be found in convenience stores.
Price range from 2,000 won to 5,000 won for a roasted sweet potato.

Where to buy gungoguma in Pyeongtaek?
If you can’t find the big barrel of oil where raw sweet potatoes turn into a winter staple on the street, you can get them at almost any convenience store such as GS25 and Seven-Eleven.

You can’t talk about winter street food without Hotteok. Hotteok is a popular Korean pancake made from simple yeast dough (or sticky rice flour dough) with a sweet and syrupy filling made from brown sugar, cinnamon, seeds and nuts.

I don’t know why, but many vendors fry their hotteok in a square pot filled with oil. Maybe it’s because a lot of people like fried. Honestly, I don’t think I’ll ever want it often because the fried hottoek not only looks too greasy, but a little soggy.

Where to buy hotteok in Pyeongtaek?

While jjinppang literally means steamed bread, hoppang is a kind of microwave-ready version of jjinppang produced from a food factory, so you have to steam or microwave the hoppang to enjoy it. at your house. In practice, there are no significant differences in meaning between the two names of bread, so you can call it hoppang or jjinppang.

You can’t judge the taste of hoppang without stuffing it with classic sweet red bean paste, but also amazing variety of toppings such as vegetables, pizza, sweet potato, curry, rice cakes, spicy chicken and even Hershey chocolate.

Where to buy hoppang in Pyeongtaek?

Hoppang is usually found in Korean grocery and convenience stores. Many convenience stores sell hoppang steamed in a steamer during the winter season. If you are looking for jjinppang, you can pick it up in almost any place for dumplings.

Fish cake is usually made from several ingredients such as hard-boiled eggs and chopped seafood and is usually served on a skewer in a light broth flavored with soy sauce. It can be a little fishy, â€‹â€‹but dipping it in soy sauce or spicy tteokbokki sauce is a great way to improve the taste.

Although most Koreans use the Japanese word, some Korean language purists insist on using the Korean word – “eomok”. Whatever the name, the delicious quick bite that costs just 1,000 won will get you bang for your buck.

Where to buy odeng in Pyeongtaek?

Various places. You can find it in food trucks on the street or in convenience stores.

How to make fried pickles