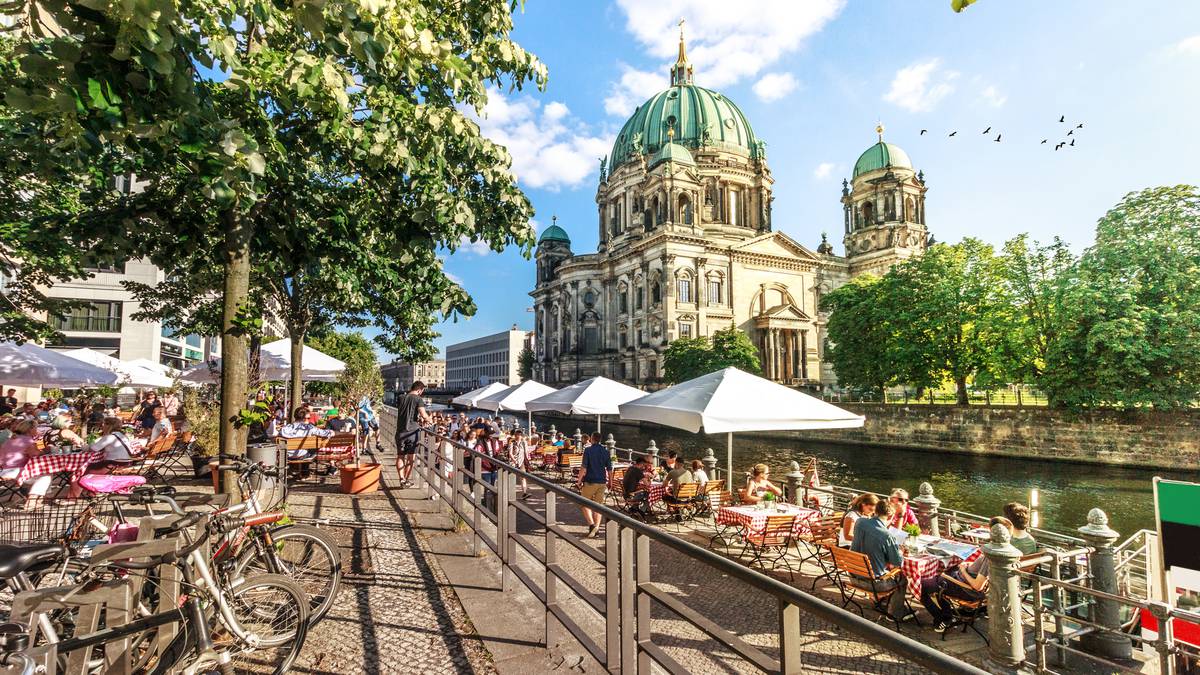 The River Spree is the perfect place to cycle, walk or enjoy a German beer in the sun. Photo/Getty Images

With around 170 different museums, Berlin is one of Europe’s capitals of history and culture. Highlights of Museum Island, a UNESCO World Heritage destination in the River Spree, include five different world-class institutions spanning over 6,000 years of history. Classical sculpture and architecture from Greece, Rome and the Middle East are on display at the Pergamonmuseum – including the reconstructed blue and golden glory of the Ishtar Gate from ancient Babylon – while the repository of Egyptian wonders from the Neues Museum includes a 3,300-year-old bust of Queen Nefertiti.

More contemporary history is on display at Museum Island’s DDR Museum, offering fascinating and often poignant slices of life under socialism in the East German Deutsche Demokratische Republik from 1949 to 1990. There’s even a Trabant (“Trabi “), the East German compact car had to wait years to buy. Take him on a virtual tour of a neighborhood in East Berlin.

To better understand the history of East Germany in the 20th century, visit the Stasimuseum, an intriguing insight into the ever-present control and surveillance powers of the Ministry of State Security.

North of the river in Friedrichshain, the East Side Gallery showcases murals and street art along a 1.3 km stretch of the Berlin Wall that divided the city from 1961 to 1989. Berlin’s essential landmarks recalling the genocide of European Jews during World War II include the moving Holocaust Memorial and Judisches Museum, expanded and reopened in mid-2020.

For ardent fans of East German “Trabi” cars – vehicles both loved and mocked – Trabi Safari offers guided tours of the city. Look forward to squeezing into (very) compact front seats, cruising (slowly) past the open-air color and art of the East Side Gallery, and occasionally getting a wry nudge from the drivers of Mercedes, Audi and BMW when stopped at traffic lights.

Tours exploring Berlin with a focus on food and drink are offered by Fork & Walk Food Tours. Book for the Inside Berlin experience: East Meets West in Berlin’s “Little Istanbul” district of Kreuzberg, and also north across the Spree to Friedrichshain for local craft beer, street food and the art of more colorful street.

Two Berlin neighborhoods are must-visit destinations for the city’s best restaurants. Stretched along the Landwehrkanal, the Turkischer Markt is tasty evidence of Kreuzberg as the traditional home of Berlin’s Turkish population, and in recent years newcomers from Syria and Iraq have also expanded the culinary mix of the region. Recommended restaurants include Fes Turkish BBQ and Cafe Mugrabi for modern flavors influenced by Lebanese and Israeli cuisine. Baklava and syrupy kunefe are the star desserts at Damaskus Konditorei.

For a modern take on traditional German dishes, always highlighting seasonal and regional produce, head to Kreuzberg’s Ora, an elegant combination of wine bar and bistro housed in a restored 19th-century pharmacy.

North of the river in Friedrichshain, the restaurant at the trendy Hotel Michelberger is informed by all that has been harvested from its own “regenerative food forest” on the outskirts of Berlin. Michelberger’s chefs also work closely with local pickers and hunters to craft menu highlights. Dinner consists of around 6-8 plates, while Michelberger’s brunch buffet is a great way to start the day.

Berliner weisse, a tangy, low-alcohol wheat beer, is a refreshing favorite in the warmer months. Try it with a dash of himbeersirup (raspberry syrup) in most coffees and beers. Look for Berliner Kindl Weisse on the menu and ask for “mit Schuss” (“with syrup”) when ordering.

Versions of Berlin’s traditional beer are made by a few of Berlin’s craft breweries, but the focus is usually on hoppy IPAs, robust stouts, and hazy pale ales. Popular destinations for travel enthusiasts include the Protokoll Taproom in the bohemian district of Friedrichshain and Heidenpeters, south across the River Spree in the multicultural district of Kreuzberg, and part of the Markthalle Neun, a renovated food market with stalls serving cuisine from around the world. The market’s regular Street Food Thursday events attract curious foodies from all over the city.

For a less polished experience, adjourn for a cocktail in Mr. Susan’s elegant underground location. Thanks to the owners’ travels, everything from Mexican mezcal to Korean soju is among the ingredients of one of the best cocktail lists in town.

For a good coffee, head to one of The Barn Roastery’s 10 Berlin locations.

Combining a friendly hostel, stylish hotel rooms and spacious apartments, Circus Berlin is north of the river and a short walk from Museum Island. An in-house microbrewery and the ability to join exclusive guest-only walking tours are other highlights.

Getting there and getting around

Find out more at visitberlin.de