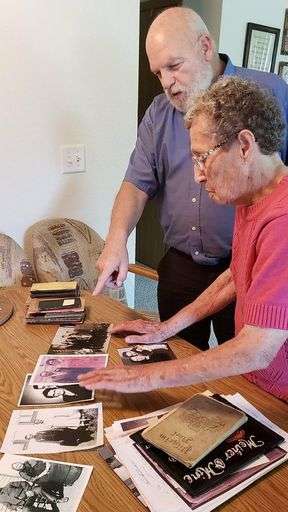 Our community of Germans in Russia lost a shining star with the passing of Robert “Bob” Dambach. Bob was a familiar face and voice to Prairie Public as a television executive. Bob was a special colleague and dear friend. We traveled together filming and interviewing to produce documentaries in Argentina, Brazil, France, Germany, Ukraine, Alberta, Saskatchewan, California, Kansas, Minnesota, Nebraska and the Dakotas.

In 1985, Bob Dambach began his work as Director of Programs at Prairie Public and was promoted to Director of Television in 1996. With his passion for history and local production, Bob opened new doors for partnerships that have led to dozens of award-winning local documentaries.

In May 1996 Bob Dambach and Prairie Public videographer Dave Geck traveled with our first Journey to the Homeland tour to Germany and Odessa, Ukraine. Bob and Dave also joined the 1997 and 1998 tours. Amazing shoots in the former Bessarabian and Black Sea German villages of Strasbourg, Kulm, Selz and Leipzig, captured the way of life of villagers, churches, bazaars, schools, gardens, canneries and agriculture; and developed the award-winning first documentary in the Germans from Russia series.

Bob’s 40-year partnership with myself and the Germans in Russia Heritage Collection has resulted in nine documentaries, locally produced and nationally distributed, in the Germans in Russia series: “Germans in Russia, Children of the Steppe, Children of the Prairie” (1999), “Schmeckfest: Food Traditions of the Germans of Russia” (2000), “Prairie Crosses, Prairie Roses: Iron Crosses of the Great Plains” (2002), “A Soulful Sound: Music of the Germans from Russia” (2005), “It’s all earth and sky” (2010), “At home in Russia, at home in the meadow” (2012), “We (n’ Never Forget): Russian Germans in South America” ​​(2105), “Gutes Essen: Eating Well in a German-Russian Country” (2017) and “Women Behind the Plow” (2019).

These documentaries, and many others, have won regional Emmy Awards, numerous Telly and Aurora Awards, as well as local, regional, national and international recognition. The inaugural 1999 program, “Germans of Russia: Children of the Steppe, Children of the Prairie”, was seen by international audiences through a broadcast on Deutsche Welle in Germany and was a finalist at the Krakow International Film Festival, in Poland, the only American documentary to be invited to participate in the competition with a jury.

Barbara Gravel, Producer at Prairie Public, writes: “One of Bob’s most exciting projects was the documentary series Germans from Russia. This body of work encapsulates the history, culture, and struggles of a group of ambitious people who let nothing stand in their way to success. ‘Gutes Essen: Good Eating in German-Russian Country’ was a favorite of Bob and the entire Prairie Public Crew! Bob was keen to show younger generations of German-Russian children learning about their cultural cuisine by cooking alongside adults who can teach the technique and the tradition. Bob loved filming a group of 4-H kids learning to make cheese buttons on a farm near Westfield, ND!

He really enjoyed telling the stories of the people of the prairie region. I smile every time I think of the treasure he left behind…the documentaries that will help viewers learn things they may not have known before. I’ve watched Bob pour his heart and soul into the documentaries he’s produced, which is all the proof I need to know that if you love your job…it’s not quite a job.

Dr. Dona Reeves-Marquardt, Austin, TX, shares, “In June 1996, Lew and I were sitting at the airport in Vienna, Austria, anticipating our trip to Odessa, Ukraine, when we had a conversation with a eloquent and informed colleague, traveler loaded with photographic equipment as well as the usual luggage. Little did we know that the moment would turn into twenty-six years of deep friendship and trusting collaboration with Bob Dambach, writing three documentary scripts and long hours of exploration, gourmet and primitive meals and lively conversations. His unique talent for finding the essence, the focal point of each subject guided the production of his many films. He was an artist in every way, except in his temper, for he remained unflappable even when everything was falling apart. May this be an ideal for all of us. We are deeply saddened by his loss. Dona and her late husband, Dr. Lewis Marquardt, originally from L inton, ND, were the writers of three of Germany’s award-winning documentaries from Russia.

Carmen Rath-Wald, President of Tr-County Tourism Alliance, shares, “Bob Dambach’s professional record is outstanding and well known throughout the region. He will be missed for the work he did and the bonds he forged. I am forever grateful to have had the opportunity to work with Bob in the making of the documentaries ‘Gutes Essen’ and ‘Women Behind the Plow’. We have lost a man with intellectual curiosity and unparalleled talent. All true. But what I will miss most is the friendship of a good, generous and always optimistic man. I will miss hearing stories about his family and seeing the loving photos of him with his grandchildren. I will miss sharing a meal with him and listening to the stories of his adventures. I will miss his sense of humor and his laughter. God Speed, my friend until we meet again.

Acacia Jonas Stuckle, Emmons County Extension Officer, writes, “It was a pleasure to work with Bob Dambach to produce two documentaries with the Tri-County Tourism Alliance. He always amazed me with his vision of a project. He could see it all coming together before we even started. His ability to capture personal stories through his interviews, edit hundreds of hours of video, and then produce a 60 minute masterpiece is remarkable. He leaves a legacy in all his work. I am grateful that sharing the story of the Germans in Russia was one.

Make the past personal | University of California