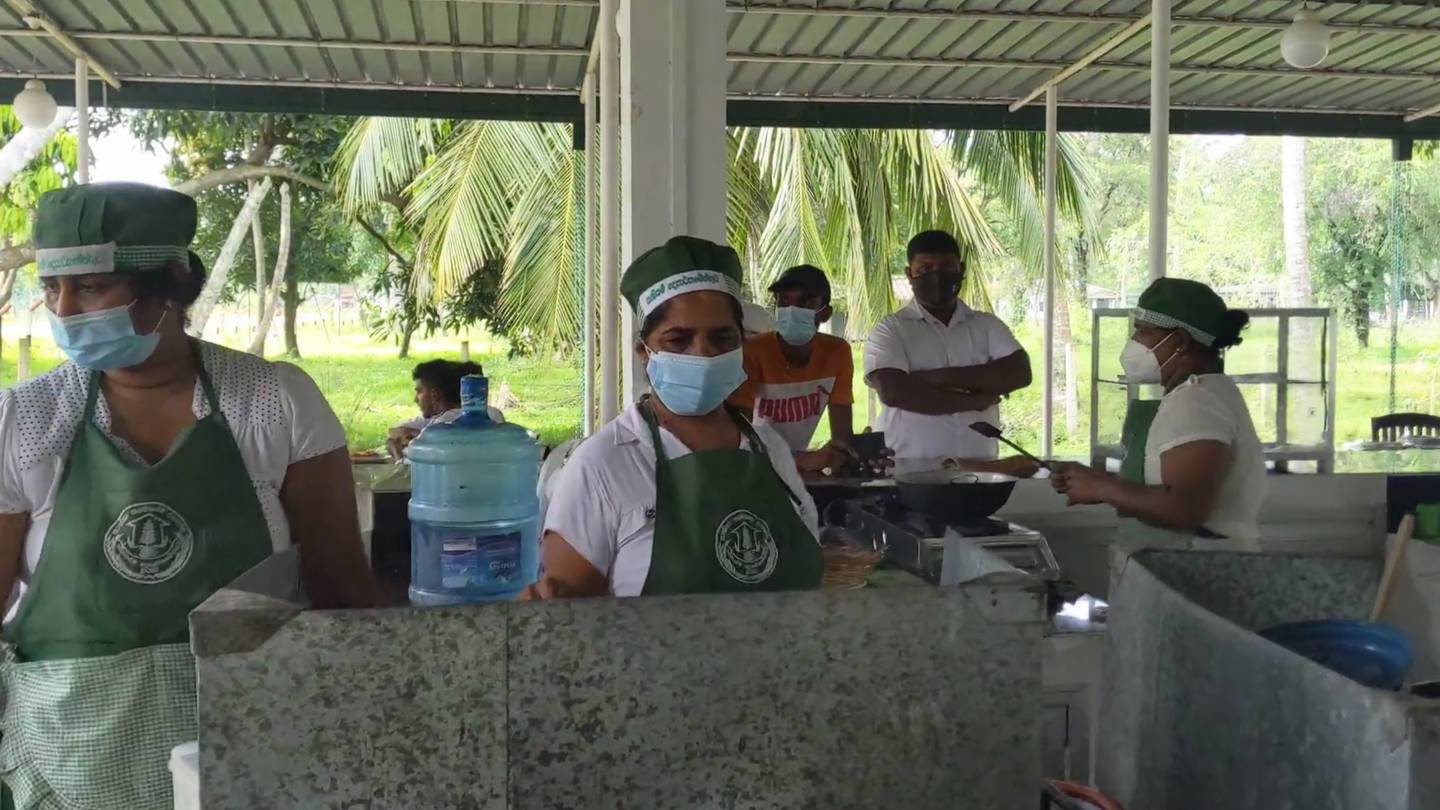 With an enthusiastic smile, Dilshani KM, a gregarious Sinhalese in a white embroidered top and skirt, quickly takes over her workstation. But not before donning his signature green apron, clear disposable gloves and a face mask.

“I have an order for kothu roti,” says Dilshani, 36, as she quickly gathers the ingredients to prepare one of Sri Lanka’s most popular delicacies, which is a combination of skill, taste and texture. .

Dilshani heats a hot flat pan while cutting the roti into small strips. She then tosses the strips with spices and assorted diced vegetables in a generous helping of oil, and walks off with a pair of machete-style knives. A few minutes later, she serves the piping hot kothu roti, garnished with split green chilies and finely chopped onions, to her customer.

Welcome to Hela Bojun Hala, an open kitchen restaurant in the lush central highlands of Sri Lanka. Here, local women (we counted nine during our visit) – all dressed in green aprons and caps – whip up various delicacies from their own workstations in a jiffy. Others are busy taking orders from customers who flood the door from morning to night.

Among the many large and small food shops nearby, only Hela Bojun Hala stays busy throughout the day.

Hela Bojun Hala, which translates to ‘traditional food courts’ in Sinhalese, is a chain of local women-run food stores operating across Sri Lanka under the slogan of ‘true Sri Lankan taste’. The restaurants are established and administered by the Ministry of Agriculture and provincial agriculture departments, to align with the United Nations Biodiversity for Food and Nutrition Project.

The initiative recruits local women who are knowledgeable in cooking and trains them in hospitality and entrepreneurship, with an emphasis on cleanliness and hygiene. Subsequently, they are supplemented by financial assistance if necessary, to install workstations inside a Hela Bojun Hala.

Since the opening of the first Hela Bojun Hala outlet in Kandy, a mountainous city in the central province, in 2006, the initiative has trained 750 women entrepreneurs, with 22 outlets operating in urban areas.

In the center where Dilshani works, 36 women work six hours a day, so income opportunities are evenly distributed. The purpose of these companies is, after all, the empowerment of women.

The introduction of traditional food courts is one of the main initiatives on the island to achieve a two-pronged objective: to encourage female entrepreneurship in agriculture and to rekindle the current generation’s interest in indigenous products. Sri Lankan.

In an attempt to achieve the latter goal, outlets promote the consumption of nutritious local foods and snacks rich in native millets, as well as fruits, grains and jaggery. As such, the initiative is also helping to reverse the poor eating habits of many Sri Lankans.

Ammachi Unavagam to the rescue

In the towns and villages of the once war-torn Jaffna province, Ammachi Unavagam or Tamil’s “grandmother’s kitchen”, replaces the Hela Bojun outlets of southern Sri Lanka and serves authentic and rich Tamil dishes nutrients to meet the needs of the local population. population.

“We prepare everything with local ingredients,” says Lakshmi, who works at Ammachi Unavagam in Keerimalai, a pilgrimage center on the outskirts of Jaffna. “Parippu vadai [lentil fritters] is the most popular snack here.

The first Ammachi Unavagam outlet opened in 2017, to provide livelihoods to war widows and other women whose lives had been disrupted by Sri Lanka’s 33-year civil war.

Even during the island nation’s recent food crisis, the Hela Bojun Hala and Ammachi Unavagam centers were a boon to low-income groups and travelers as they provided meals at affordable rates.

“They serve fresh and tasty local food,” says Yasantha, who frequents the roadside Hela Bojun Hala where Dilshani works to buy pani-walalu (a Sri Lankan version of orange-rolled Indian sweets jalebi) and ‘aasmi (fried rice flour and coconut milk) for his family, who live on the outskirts of Kandy.

Dilshani is one of the few remaining Sinhalese women who still cook traditional Sri Lankan delicacies including aasmi and kola kenda, an ancient herbal porridge and drink.

“I sold homemade snacks for 10 years before I started working at this restaurant two years ago, but Hela Bojun Hala has been a blessing to me,” she says as she hands over half a dozen aasmi and pani-walalu in Yasantha.

Besides financial independence, working here has helped entrepreneurs like Dilshani foster a brotherhood with their colleagues as well as nurture a loyal clientele beyond the confines of the restaurant.

Dilshani now sells her homemade snacks and drinks on Facebook and takes orders over the phone. And while a few hundred Sri Lankan rupees are used to pay for electricity and subsidized rent at the Ministry of Agriculture, the remaining amount is her profit, an income which, she says, “supports my family”.

The Intricate Behind-the-Scenes of a Korean American Classic