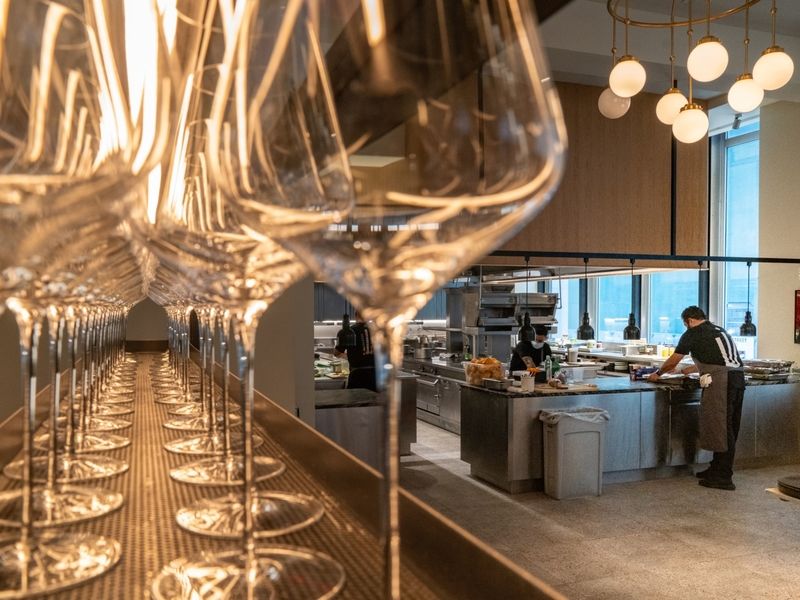 The famous London steakhouse will switch from British beef to dry-aged American beef when it opens near Gramercy Park. Chefs Matt Brown, who cooked at restaurant Marco Pierre White, and Matt Bernero (a Minetta Tavern alumnus) will oversee the menu which will be anchored by rib eye, porterhouse and T-bones, accompanied by sauces like gravy. with bone marrow and anchovies. Dutch. In addition to a 146-seat dining room, a bar built for 50 people will present the franchise’s famous cocktails.
109 E 22nd St.

The Quality Branded Group’s latest restaurant, whose spots include Don Angie and Smith & Wollensky, focuses on Middle Eastern cuisine. NoMad alumni Madeline Sperling and Juliana Latif both feature influences from countries like Lebanon, Israel, Egypt and Syria. Bigger plates will come out of the fireplace, including the lobster tagine with kumquats and the duck borek in puff pastry, to share. AvroKO designed the 75-seat space in light, blue and green tiles.
85 Manhattan West Plaza.

There will only be one appetizer at celebrity chef Laurent Tourondel’s next spot: American Wagyu Skirt Steak. The beef will be accompanied by a green salad, fries and béarnaise with pepper. (This is a concept popularized by the old school Relais de Venise l’Entrecôte, also in Midtown.) To complete the meal, there is a dessert cart, and to drink local beers and cocktails on tap. .
835 Sixth Ave.

This open-air restaurant in Hudson Yards wants to take diners to the beach. Chef David Ladner, formerly of Rialto in Cambridge, Mass., Teamed up with Cobi Levy and Will Makris of Lola Taverna to create a waterfront seafood shack. There will be lobster pastries, two kinds of lobster rolls and fried seafood baskets, as well as soft and whoopie pies. Expect a rock yacht in the background.
350 11th avenue

Ignacio Mattos, who made Estela a destination dining spot, is launching an all-day cafe and bakery, the first permanent opening in a series of notable restaurants to come to the rehabilitated Rockefeller Center. Located just in front of Today’s show studios, Lodi will be serving food throughout the day including vitello tonnata and porchetta panini with pepper marmalade. The drinks menu is inspired by Italian aperitif culture.
1 Rockefeller Square. Opening in September.

Chicago-based Michelin-starred chef Rick Bayless arrives in New York City with an outpost of his fast Mexican restaurant Tortazo, which is backed by a $ 12.4 million investment from Philippines-based fast food company Jollibee. The menu will highlight Oaxacan specialty (large, crispy tortillas topped with ingredients like beans, salsa, chorizo, and avocado) as well as tortas, in versions like a smoked pork cubana. The bar will serve a wide selection of tequila and mezcal.
1123 Broadway.

In a two-level space, two separate restaurants will offer very different menus. Upstairs, chef Akiko Thurnauer (formerly of Mission Chinese and EN Japanese Brasserie) will offer a menu that evokes a Chinese dinner, such as fried rice with soft-shell crab and candied olives; Dan Dan noodles with poached egg; and whole smoked duck with honey and orange fennel glaze. Downstairs, a Japanese restaurant with a sushi and crudo bar by chef Takayuki Nakamura will open later in 2021. For drinks, the underground underground bar opens next door.
43 Mott Street

The space, which includes a 56-seat dining room, lounge, and bar, is reminiscent of the ’70s with green reed glass panels. Chef Bryce Shuman will focus on wood-fired dishes, including whole Mediterranean sea bass grilled with salsa verde and roasted head of chochon with a sweet and sour pork jus, as well as entrees like the tomato carpaccio. and grilled artichokes with aioli. In October, the chef and his team will open a Japanese-inspired restaurant in the former O Ya space.
127 E 27th St., Park South Hotel.

This new wine bar, signed by the experts at L’Artusi, displays an Italian influence on both the bottles and the dishes. Joe Vigorito’s menu features sharing platters ranging from crudo tuna with fennel and citrus, to lamb meatballs with mint salsa verde and braised short rib lasagna. Next door, the team is opening Via Porto which will offer sandwiches and pastries, as well as the staple food in the event of a pandemic: meal kits.
520 Hudson Street

The final location of Danny Meyer’s Union Square hotel group will be in the sprawling Manhattan West development. The place, whose name translates to “we did it”, includes a dining room with 125 seats and an outdoor area with 40 seats. Chef Hillary Sterling, formerly of Vic’s, will offer dishes with a strong Italian accent like cast iron focaccia with candied tomatoes, rigatoni alla gricia and Milanese pecorino pork.
100 Manhattan West Plaza.

The restaurant that has helped New Yorkers become familiar with open-style temaki, or taco-style sushi rolls, brings the fun concept to Williamsburg. Masa Taka Sakaeda alumni Jihan Lee and Lisa Limb will be offering several new items for the Brooklyn location, like crispy rice concoctions and sashimi options like kanpachi with mustard miso and chili oil. sun-dried shishito. There will also be a sake bar and expanded drink options.
236 North 12th St.

Dowling’s at Carlyle, Upper East Side

Executive chef Sylvain Delpique (ex 21 Club) will run this restaurant named after Robert Whittle Dowling, former owner of the Carlyle. It offers a menu of fine cuisine essentials, some updated, others not, including tuna tartare with whipped cream, roasted chicken with truffles and Diane steak, flambé at the table. The black and white design of the dining room evokes the 30s and 40s and maybe also the tuxedos.
981 Madison Ave.

Located inside the newly opened whiskey distillery, the first to open in about 100 years is this 78-seat restaurant. Chef Adam Raksin’s menu updates classic American fare; many of them will feature Great Jones’ signature product, including chilled shrimp with Bourbon cocktail sauce and flank steak fries with four grain whiskey and green pepper sauce. Bourbon will also be present in an applesauce served with cheese plates.
686 Broadway.

Upper East Side sushi specialists bring their aged fish downtown to a 7-seat counter. Chef Junichi Matsuzaki’s menu will highlight 30 dishes with a spotlight on the nigiri. Reservations can only be made over the phone and the Elite experience doesn’t come cheap; dinner will cost $ 395 per person, drinks not included.
458 West 17 St.

Chef Julian Medina and his business partner Louis Skibar, whose Mexican culinary empire includes Toloache, present their popular Queens pop-up at UWS in a space that seats 60 indoors and 40 outdoors. Its menu showcases various lobster preparations, from whole tacos to steamed or sautéed with a homemade spicy sauce. Customers also choose when they want their market fish to be grilled or fried. The bar will focus on gin but with lots of beer too.
155 Amsterdam avenue

It was New York’s electric dining room in the 1980s; the doors were closed, supposedly forever, just before the pandemic. Today, the legendary space, which removed ‘Bar & Grill’ from its name, has been relaunched by longtime managing partner Bret Csencsitz with chef Ron Paprocki. It pays homage to signature dishes: tagliatelle with clams and lobster that riff the legendary seafood salad. There is also a 40-day strip loin. The large postmodern hall will also function as a sort of gallery; limited edition prints will be sold to benefit local charities like GROWNY.
12 E. 12th Street.

New York’s newest food hall will feature 17 restaurants in the Citigroup Center space that was developed by Boston Properties. Among the places trying to attract returning office workers are the outposts of Brooklyn’s beloved Greenpoint Fish & Lobster, which will also serve wine and craft beer; KazuNori, the Original Hand Roll Bar; and the famous Mah-Ze-Dahr bakery by chef Umber Ahmad.
601 Lexington Ave

In a former butcher’s shop in Carroll Gardens, Sal Lamboglia will launch his first solo restaurant, after years of running kitchens in venerable places like Locanda Verde and the Dutch. In its next trattoria, Lamboglia will serve a handful of primi and pasta as well as entrees like mum’s chicken parm. In addition to the brick-walled space with open kitchen, there is a rear garden with 50 seats. Another Lamboglia will also be in action in the kitchen: Tony, Sal’s father, who became famous for making tiramisu at Bar Primi, will bring his dessert specialty to his son’s restaurant.
Union St.

The team behind this year’s surprise hit restaurant, Dhamaka, brings another take on shameless Indian cuisine to the city, this time at Park Slope. Roni Mazumdar and Chef Chintan Pandya will present dishes from Calcutta (Mazumdar’s hometown) to Masalawala, and a market selling spice blends and specialty Indian products. In the meantime, the duo are also opening two fast casual spots in Manhattan: Rowdy Rooster will specialize in spicy fried chicken, while Kebabwala will highlight kebabs inspired by Indian variations.
365 Fifth Avenue.

A DC flagship restaurant from Nobel Prize-nominated chef José Andrés arrives in New York City later this fall, relocating to the Ritz-Carlton New York NoMad. The menu, a collaboration between Andrés and Michael Costa, will feature many Turkish, Greek and Lebanese mezze dishes on Zaytina DC’s menu, such as the spicy soujouk sausage with kasar cheese with an egg at 65 °, as well as new specifically created items. for New York.
1185 Broadway.