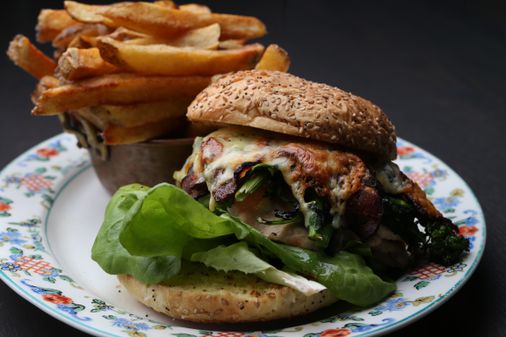 “The goal was to make it a neighborhood restaurant, a gathering place for the community,” says chef and co-owner Marc Sheehan, who grew up in a town in Milton. “Our ultimate goal would be to open up the place where people went on Thanksgiving Eve and hung out at the bar. He would then have achieved what we wanted him to achieve. There was no conversation about Michelin stars. It was literally if people came to eat wings at the bar the night before Thanksgiving, and those are good wings.

The menus of the two restaurants are often centered around the same ingredients, and what happens next illustrates how they diverge. At Northern Spy, for example, these wings are iced in house beer and grilled; at Loyal Nine, they’re stuffed with mushroom duxelles and made with spicy burnt tomato puree, candied lemon and dukkah. At Northern Spy, seared scallops are served with corn, tomatoes, oyster mushrooms and bacon; at Loyal Nine, they’re served with sautéed cantaloupe, homemade salted pork belly and golden trout roe. Neither restaurant is more ambitious. The ambitions are just different. You would bring the date you want to impress to Loyal Nine; to Northern Spy, you could bring the same date but also your family to celebrate Nana’s birthday.

There’s a pretty patio that invites boozy weekend brunch, with a menu of crab roe benedict, brioche French toast (with apple butter, naturally) and other dishes that bridge the gap between in the morning and afternoon. But the heart of the restaurant is the wood-fired fireplace. On many dishes, at least one element carries its smoky, fragrant and airy kiss, nostalgic like a childhood camping trip.

Scallops may be my favorite dish on the menu, absolutely classic and comforting, but also worthy of an occasion. Corn and mushrooms are grilled on the hearth; the tomatoes are smoked for hours, then dried a little over the flames. There’s bacon, too: smoke layered on top of the smoke, offset by an undercoat of creamy and irresistible corn grits. It is useless if the scallops are not perfectly cooked. They are.

If there’s one dish that defines Northern Spy, it might be the steak tips. The beef is grass fed, from Massachusetts. It passes on the grill, gives off smoke, rests for a while in beef gravy with Worcestershire sauce. Striking a balance between tender and chewy, the steak tips are accompanied by grilled green onions, peppery watercress and fries.

French fries: the afterthought of bar food, the long-time bearer of the misconception that all fries are good fry, so why spend the time. Northern Spy is passing the time, and it shows. “It’s a two-day process to get a fry,” Sheehan says. The potatoes are cut and soaked the day before. Then they are blanched and cooled, blanched and cooled, blanched and cooled again. When fried, they arrive with a hand-cut, rustic, dark golden and brown appearance, crisp and crisp, and having a deep potato flavor. They don’t even need ketchup, although they don’t object to it.

The dinner menu – no one has a ‘dinner’ here – includes seasonal entrees like burrata with roasted peaches, summer squash, crunchy seeds and croutons, a late summer panzanella. . The flatbreads are topped with smoked tomatoes or braised beef. Smoked Blue Fish Pie with Brown Bread, Baked Clam Dip with Chips and New England Clam Chowder with Salted Pork and Homemade Crackers are taking diners into fall, which seems be the perfect season to visit Northern Spy as she heads for her first birthday. (It opened on Boxing Day 2020.)

There are potato balls with smoked fennel and grilled asparagus; there is also creamy mac and cheese. There’s oven-stuffed haddock and roasted artichoke chicken and a toasted Little Gem lettuce Caesar salad; there is also a hot fish sandwich and a double cheeseburger. There are nearly a dozen vegetable sides and a kids’ menu with slightly spicy versions of the usual, from grilled cheese (on a homemade brioche with aged cheddar) to oven-baked fish fingers. (At lunch, the menu is slightly truncated, but with a chicken sandwich.) For dessert (dinner only), there’s a strawberry buttermilk pie, hot chocolate chip cookies, etc.

This is the kind of place where someone would be happy to suggest a food and wine pairing – Wine Manager Rebecca Myers’ list is helpfully broken down into flavor profiles like “lush, fruity, flowery” and “crisp sound. , tangy, fragrant ”- but you could also drink New England beer. Or stick with the theme and order a bottle of cider. Wine and cocktails are available to take away, as well as food. It’s a substantial menu executed by a small team: Sheehan and Chef Paul Clark basically share the cooking, while Loyal Nine Pastry Chef Kasey Geremiah prepares the candies.