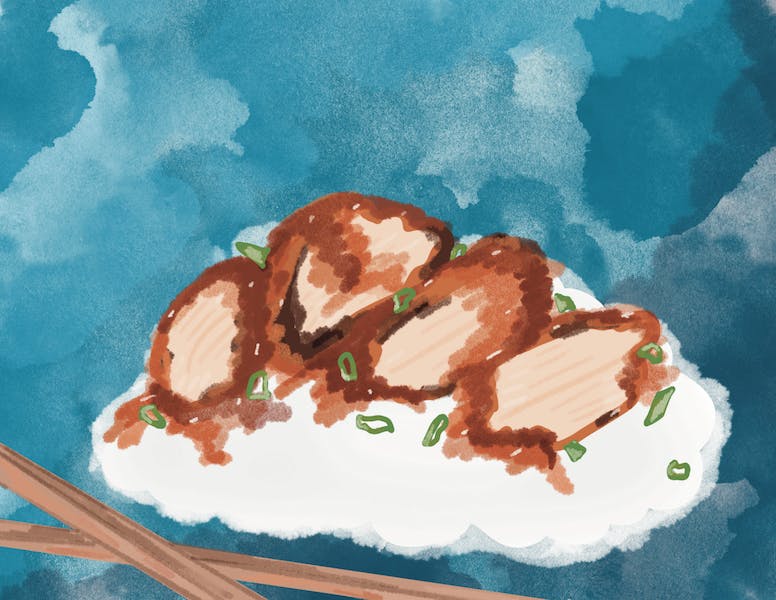 The secret of teriyaki dishes

Chicken teriyaki and similar dishes are a staple in Japanese-style restaurants around the world. They offer American diners a simpler option as opposed to sushi and more authentic dishes. It has become the go-to Asian dish for people with picky palettes.

Although rich and full of flavor, teriyaki dishes are actually simple and easy to cook. They only require protein and marinade. They can be served over white rice with a sautÃ©ed vegetable on the side, a generally healthy meal. For this reason, teriyaki should become a staple for students around the world.

Despite its association with Japanese cuisine, Teriyaki is about as inauthentic as it gets. The name actually refers to the cooking method instead of the dish itself. “Teri” means glazed or bright, as in the appearance of sweet sauce. “Yaki” means toasted or grilled, as in the method of applying heat.

The origins of the dish are not clear, as is the case with most Asian-American dishes. The popular conception is that the dish was developed by the Japanese who immigrated to Hawaii in the 1960s. There, they mixed ingredients from Japan, such as soy sauce, with native Hawaiian ingredients, such as brown sugar and pineapple juice. This fusion of cultures created teriyaki sauce.

There is no such thing as an “authentic” version of teriyaki sauce. Sugar and soy sauce have been mixed since time immemorial, and the sweet and savory flavors blend perfectly. It can be assumed that the sauce developed independently in Asian-American restaurants over time due to these facts. Hawaii is considered a possible place of origin due to the number of Americans of Japanese descent who live there.

This is a basic recipe that can be found posted in various online forums. It’s a combination of soy sauce, sake, mirin, sugar, and a thickener like cornstarch.

Sake and mirin are â€œrice winesâ€ made from the fermentation of, you guessed it, rice. Sake is a dry wine and mirin is a sweet wine. When cooking, sugar can replace mirin if you only have sake. You can also rule out sugar in favor of more mirin, although a thickening agent will need to be added instead of sugar.

Normally, sugar acts as the main thickener in a Teriyaki sauce. All the ingredients are mixed and boiled until the sugar thickens the sauce, creating a reduction. Thicken the sauce in this way has the potential to make it too sweet for some. Adding cornstarch allows the sauce to thicken, without reducing it too much, thus avoiding excess sweetness.

Note: A common rule of thumb when buying wine or beer for cooking is: if you don’t drink it pure, don’t cook with it.

2 tablespoons of sugar (to change according to the preferred sweetness)

1 tablespoon of cornstarch mixed with a porridge with water

Water to be diluted to the desired thickness

This teriyaki sauce is about as inauthentic as it gets, but it’s packed with flavor. Some combinations may look weird, but trust me, it works.

2 tablespoons of a pilsner beer (like Miller High Life)

1 tablespoon of cornstarch mixed with a porridge with water

Note: Do not cook this recipe without the cornstarch. It doesn’t cut as closely as the previous recipe.

Now that you have the teriyaki sauce, you are ready to cook a variety of dishes. Teriyaki sauce goes well with anything, so feel free to experiment.

By far the most common dish that uses teriyaki sauce. The â€œtraditionalâ€ chicken teriyaki fry the meat with salt before being dipped in the sauce. Many restaurants cut the process in half, instead using teriyaki sauce as a marinade. These methods do not provide the same crunch and flavor as the original method, which should be preferred.

2 on the skin chicken thighs (boneless)

Note: In general, any boneless dark meat from chicken can be used in this process. White meat can also be used, but it is recommended to marinate and flour the outside first. Indeed, white meat dries up very quickly compared to dark meat.

The sweetness of the tofu really lets the richness of the teriyaki sauce taste. It’s a great vegan option.

Leftover chicken fat makes a great frying oil for any veg you might have around the house. It is an excellent accompaniment to add to your proteins and your rice.